No Christmas holidays for children at Home of Joy

There will be no Christmas holidays for the children who call the Home of Joy on the outskirts of Makhanda their home.

Instead, said founder Nomalungelo Margaret Ngcangca, the abandoned youngsters in her care would spend the holidays “like they always do” – under her roof.

Mama Margaret, as the kids call her, established the haven in 1995 shortly after losing her son to HIV-Aids.

Her personal journey – she witnessed many people being mistreated and rejected by their families after testing positive – made her aware of the community’s ignorance about the disease.

With no other refuge, she took it upon herself to care for them and their children and, over time, this selfless mission evolved into providing shelter for orphaned and neglected children.

“Home of Joy looks after children who don’t have parents and those whose parents are not fit to care for them,” she explained, sitting on a lounge suite that had clearly seen better days. “We give them food, love and shelter.”

She said that she worked hard to provide for the children’s basic needs “because they deserve to be given a chance”.

With little to no backing through governmental and other official channels, the haven is heavily dependent on the community for support. 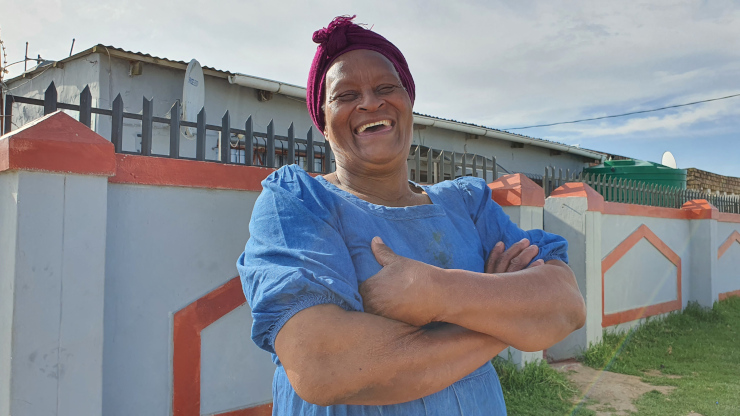 A Winter Warmers drive organised by Kelston Isuzu Grahamstown earlier this year was one campaign that had made a real difference, according to Mama Margaret.

People were asked to drop off warm garments at the firm’s premises and the response was so overwhelming that the dealership ended up donating three bakkie loads of clothing and blankets.

“That was very helpful because we don’t have any funding and what money there is I use to buy food,” said Mama Margaret, who is currently responsible for the wellbeing of 32 children, for of whom are babies.

“When we get assistance like that, we keep some clothing for future use and what we can’t use we give to the community around us. They are also suffering so we help them wherever we can.”

Kelston Isuzu sales manager Duifie Niewoudt said it was amazing to see how the community came together to support the children.

“It would not have been possible without them; we are extremely grateful to everyone who has contributed. It was priceless to see the smiles on the children’s faces.”

Even though Mama Margaret is a mother figure to the children, she rules with an iron fist to instil a sense of discipline that she believes will stand them in good stead as they navigate adult life.

“With no parents to care for them, I tell them they must behave, listen to me and finish school. Then they can go out to find a job.”

Over the years, several of “her” children have been able to enrol at Rhodes University – one of whom is currently studying towards a degree in nursing.

“At the end they do feel like my children. It’s not easy to let them go but I know, once they have qualified, they must go out and find work.”

Faith has helped Mama Margaret, who was named Makhanda’s Citizen of the Year in 2011, overcome many obstacles.

“We are always looking for donations and one time we had no food in the house, so I prayed to God for a miracle,” she said. “All I had was some stale bread which I got from a supermarket; it was really hard.”

But one morning she received a phone call from a lady who said she had heard of Home of Joy and wanted to donate food.

“This came in boxes in a trailer and a van – goods which were provided for us in God’s name,” she said.

“We are trying to find space for this and hopefully we will be able to get help from the municipality if we do.”

In September, she received an Ubuntu award from Kingswood College on behalf of the local community.

“On behalf of the Grahamstown community, the interact pupils and staff from Kingswood College, we present this award to you today because of the massive impact you have made in our community. Your sacrifices and your work do not go unseen”, it reads.