Golden finish to the year for Madibaz netball star

A burst of scoring in a group match against Botswana turned out to be the catalyst for the South African U19 netball team to claim gold at the Region V Games in Lilongwe, Malawi, recently.

“I think that second quarter was one of the big moments for the team because we suddenly realised how good we could be,” said rising SPAR Madibaz netball star Hanniska van Vuuren.

In that period, the young South Africans recorded the remarkable statistic of scoring 28 goals while conceding only three.

“From there we just clicked and ended up unbeaten in the tournament,” explained the 19-year-old business management student after the team’s 66-16 demolition of Zambia in the final.

“That came after a tough and physical opening game against Malawi, which brought us together as a team and made us stronger.

“Seeing the positivity of the players and management after the first match, we realised this was a special team and that we could possibly go all the way.”

The title crowned a memorable year for the Gqeberha-born wing attack, who proved during the tournament that she could also hold her own as a goal attack.

She had initially been selected at wing attack for the Games but was repurposed as a goal attack after the incumbent suffered an injury before the first match. 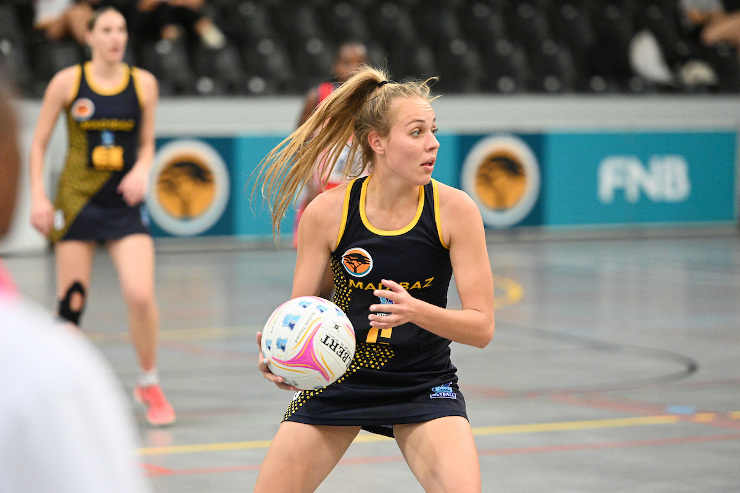 SPAR Madibaz netball player Hanniska van Vuuren was a member of the South African U19 team that won the gold medal in the Region V Games in Lilongwe, Malawi. Photo: Varsity Sports

“I had to fill that position for the whole tournament,” said Van Vuuren. “I actually enjoyed and embraced it.”

The former Framesby pupil debuted for the Madibaz at the SPAR Madibaz Netball Tournament earlier this year and the steep learning curve continued with her selection for the national team.

“There is not enough space to write down all the lessons I have learnt throughout this year,” she said, “all thanks to our amazing coach Lana Krige and netball manager Melinda Goosen.”

“One lesson I have taken from the opportunity to participate in Malawi is that hard work beats talent and that it does get rewarded.”

Her plan is to continue putting in the hard yards and to be a consistent performer as she continues to work towards her major objective of being selected for the Proteas.

“Netball is tough, but I want to be tougher!”