Day of smiles as radio station’s calendars hit the streets

It was a day full of smiles as SPAR Eastern Cape joined hands with radio giant Umhlobo Wenene to give away 1.5 million calendars to happy listeners throughout the province today.

In a microcosm of what unfolded in the region, thousands of Umhlobo Wenene fans streamed through the gates of Daku SUPERSPAR in KwaZakhele to land one of the prized items.

The calendars feature Umhlobo Wenene and TruFM presenters and, this year, there was also a limited number printed featuring actors of the Ithini na Lento radio drama.

Eastern Cape Combo business manager Loyiso Bala explained how the concept had evolved over the years and provided staggering statistics on the station’s listenership, believed to be among the biggest in the world.

According to him, the Combo included Umhlobo Wenene with its 4.5 million listeners and youth radio TruFM with around 280 000.

“These calendars have been part of the station property for years,” said Bala. “It’s amazing how their popularity has grown from year to year.

“That’s why we felt the need to partner with SPAR to make it available to as many people as possible, especially in the Eastern Cape.”

He explained that the additional calendar had been introduced due to the traction of the Umhlobo Wenene series, which saw two million listeners tune in every day at 1.30pm. 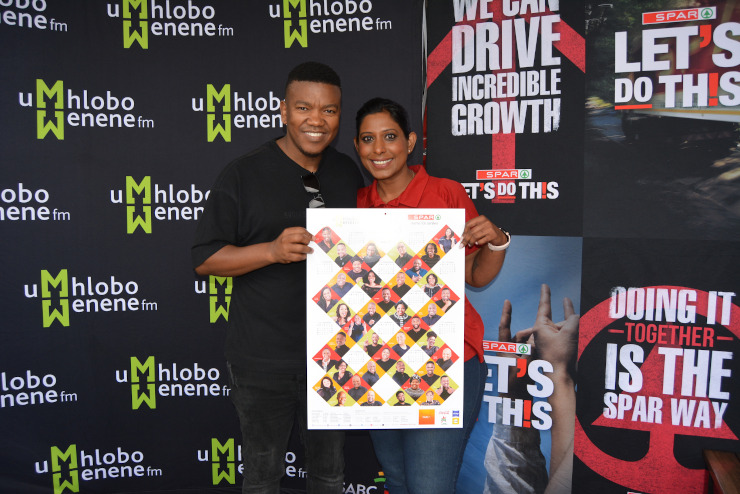 “People have always wanted to know what these actors look like so for the first time we have printed those and they have proved a huge hit.”

SPAR EC advertising manager Roseann Shadrach said it was a “special experience” to be part of the handout for the second time.

“The previous year we partnered with the SABC was in 2019 and then Covid hit,” she said.

“But the experience of linking two brands that are just so huge in the Eastern Cape meant that it was a no-brainer to join them again to reach 1.5 million homes in the broader Eastern Cape.”

She added that it tied in perfectly with SPAR EC’s 2023 We’re for Smiles campaign.

“What we have experienced today is the absolute euphoria of being caught up in the smile campaign because these presenters have become such icons in the hearts of the community.

“You can literally see them picking up the calendars and immediately identifying who the deejays are. People are just receiving them with such love that we can tick that box and say, ‘job well done’.”

Umhlobo Wenene and TruFM both ran their breakfast shows from outside broadcast units at Daku SUPERSPAR and it made for a festive spirit, said Bala.

“People started queuing at 6am and have come from all over. I spoke to a friend who lives in Motherwell but had come all the way to KwaZakhele to get his calendar.”