Emotions ran high as the last of 200 wheelchairs were handed over to recipients during the closing function of the 11th APD and SPAR Eastern Cape Wheelchair Wednesday campaign at Nelson Mandela Bay Stadium in Gqeberha this week.

The project was rolled out in the metro and East London on consecutive Wednesdays during October.

It was started by the Association for Persons with Physical Disabilities in the Bay and the 2022 edition marked the 10th year of SPAR EC’s involvement.

During this time, 1 600 wheelchairs – donated by Network of Caring – were distributed by APD and 2 600 people took part in the weekly rollouts.

Stapleton recalled an incident from one of this year’s Wednesdays that he said would stay with him forever.

“As we gathered that morning at Daku SUPERSPAR, a man arrived in a broken wheelchair which almost buckled, squeaked and barely rolled. There was no bar for his feet to rest on – just a piece of wood.”

He had not been in line to receive a wheelchair but approached the APD in the hope that it would be able to help, said Stapleton. 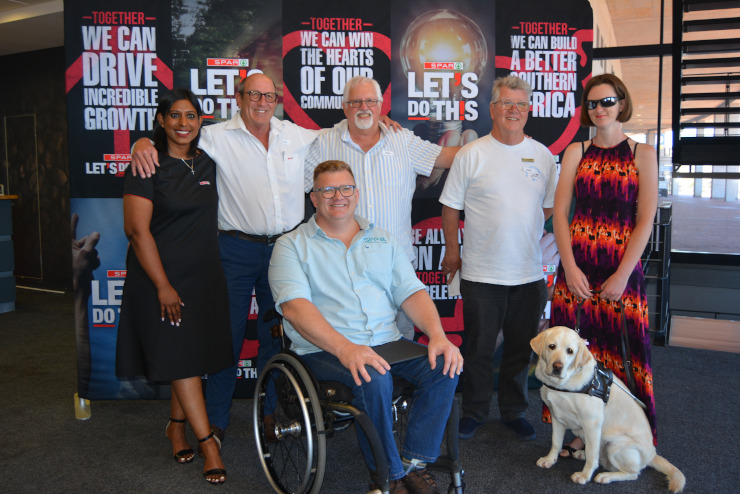 SPAR Eastern Cape celebrated its 10th year as title sponsor of the annual Wheelchair Wednesday campaign this year. At the final handover function at the Nelson Mandela Bay Stadium were, back from left, Roseann Shadrach and Alan Stapleton of SPAR EC, Brian Paddey of the Amputee Support Group, Brian Bezuidenhout and Loandrie Potgieter (with her dog Casey) of the Nkosinathi Foundation for Blind and Partially Sighted People and, front, guest speaker Bartho de Vries. Photo: Full Stop Communications

“As the man waited and watched others receive their chairs, his hope was surely diminishing.”

But APD had made a plan and when he was lifted into a new chair, he burst into tears.

“His face beamed,” said Stapleton. “I have never seen a happier smile.”

De Vries, now 43, was injured in a car accident in Walmer in the city 22 years ago.

His message was one of hope and an example of how the right attitude could turn a negative into a positive.

De Vries, who had been a passenger in the car that crashed into a tree, said he remembered being outside the car while struggling to regain consciousness and realising that he could not feel his legs.

He ended up in Conradie Hospital in Cape Town and experienced a sobering moment when the surgeon paid him a visit.

“I will never forget this,” he told the attendees.

“A doctor came to the bedside and said to me: ‘I’m your surgeon. You obviously have been in a car accident. You’ve broken your back and will never walk again. I’ll see you in theatre’.

“And then he just walked to the next bed. And, boom, in that instant my life as I knew it was over.”

After six months of rehab, he wondered how he would get through the ordeal.

“Then I was placed in a wheelchair and there was suddenly this realisation that my legs, which I hadn’t seen since the accident, didn’t work,” said De Vries.

“But, let me just tell you, at that very moment I was not disabled.”

The wheelchair enabled him to do things like put his child on his lap and get to his car.

“I can say it is my ability, not my disability. This wheelchair does not define me, it makes me stronger.”

De Vries said everyone had time and talent but they also needed opportunity and resources.

“An initiative like this provides those resources. From donating wheelchairs to creating awareness, I salute these organisations.”

He challenged those present to be the change in their own lives.

“Respond to situations, don’t just react to them. Life has a way of carrying on and if you want something badly enough, you will achieve it.”

In recent years, Wheelchair Wednesday has widened its reach to include the Amputee Support Group and Nkosinathi Foundation for Blind and Partially Sighted People. Each received a donation of R25 000 from the family retailer.