The Madibaz football teams will have qualification for the Varsity Football tournaments squarely in their sights when the University Sport South Africa week takes place in Secunda in Mpumalanga next month.

They will be among a total of 40 men’s and women’s sides that will be chasing USSA glory from December 4 to 9 while also eyeing entry into the prestigious Varsity Football set-up for 2023.

Madibaz Sport football manager Mark Tommy expected plenty of challenges in the national varsity competition but felt that the men’s team would be motivated to make their mark on the back of their recent strong performances in the local leagues.

While the first team ended the 2021/22 SAB Regional League in third place, they are currently leading the 2022/23 log.

This augured well for coach Elrio van Heerden and his troops as they gunned for a spot in the top eight, according to Tommy.

“That will see them qualify for Varsity Football.”

Although he made their goals for the USSA tournament clear, Tommy acknowledged that it would be a tough passage for both the men and women.

“Varsity Football has been dominated by the inland universities as well as the University of Western Cape,” he said. “These are all institutions who have invested greatly in their football programmes.”

The Madibaz men will be up against the perennially strong Tshwane University of Technology outfit and also face stiff competition from the universities of Pretoria, North-West, Free State, Johannesburg and KwaZulu-Natal. 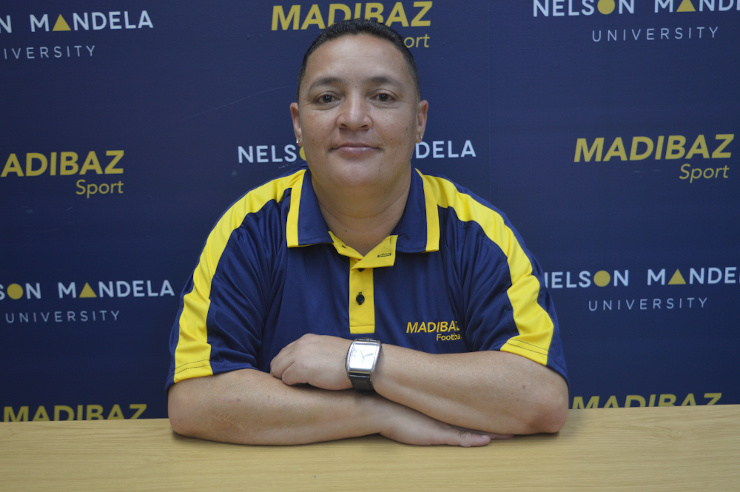 Madibaz women’s football coach Niesie Daniels and her squad are geared up for the University Sport South Africa tournament taking place in Secunda, Mpumalanga, from December 5 to 9. Photo: Supplied

Tommy said women’s coach Niesie Daniels was buoyant about their prospects after several good performances in the provincial competitions.

They finished runners-up in the coastal group of the inaugural Sasol Provincial League after being promoted from the Regional League following the 2021 season.

But Tommy conceded that the USSAs would be “on a different level” because they would be competing against sides who played in the National First Division – including the University of Western Cape, who are currently lying in second, and top-five teams such as TUT, UJ and UP-Tuks.

The Madibaz teams are ranked 11th (men) and 10th respectively for the USSA tournament.