Gqeberha’s Marco Joubert stamped his authority on the BDO Hayterdale Classic MTB Race early on to lay the foundation for a comfortable victory in the 40km feature event, which took place at Hayterdale Trails just outside Addo today.

Joubert put his stamp on the race on Zuurberg Pass, which starts directly after the neutral zone.

“I pretty much did an interval session to see where my form was,” said the Imbuko-typeDev-Giant star, who is one of the pre-race favourites for the upcoming Cape Pioneer Trek.

Two kilometres into the winding ascent he found himself on his own and he simply kept going to extend his lead all the way to the finish.

“The win today has given me a real boost,” he told the media afterwards.

The route, which featured just short of 1 000m of elevation, took riders over similar terrain to that seen on the final day of the Great Zuurberg Trek and Joubert was suitably impressed.

“Besides the trails, the infrastructure has developed so much over the years that it is the perfect place to spend a weekend. It’s great riding and the off-the-bike hospitality is brilliant.” 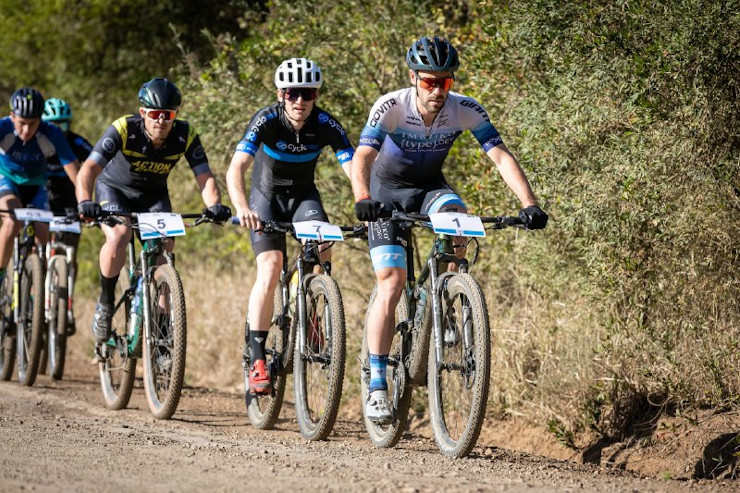 Joubert also rode to victory in this year’s Herald Cycle Tour Extreme MTB Race in the same area before finishing the Cape Epic as the first South African and eighth overall alongside Pieter du Toit, who will again partner him next week.

In the women’s race, Nicola Freitas (2:03:29) from Gqeberha faced a much stiffer challenge before eventually going clear of Juanita Mackenzie (2nd) and Anriette Schoeman (3rd) on a chilly morning.

“I’m not as strong as them on the climbs,” said the 28-year-old Action Cycles rider, who returned to this discipline of the sport following several years of triathlon racing.

“With that start up the pass I knew it would be tough and my objective was to keep them in sight and not to let the elastic snap before the top. I was able to do that and was probably about 30 seconds behind them.”

Taking advantage of her technical skills, she set off in pursuit of the leaders as soon as the race hit the singletrack sections.

Freitas eventually hit the front after 9km and from there it became a matter of “working hard all the way”, she said.

“It wasn’t easy to overtake on the narrow trail, but I managed to pass them and knew I would have to continue focusing on the descents to build my lead.

“I tried to keep it smooth and not take too many risks. The winding singletrack meant you could never really get away completely.

“There was quite a long, steady climb near the finish and I knew they were coming for me, so I just had to keep pushing.”

She did enough to finish a comfortable three-and-a-half minutes ahead of Mackenzie and admitted that she was “stoked” with the result.

“This is a real boost for my confidence, especially ahead of the Cape Pioneer Trek, which I will be riding with Juanita [Mackenzie].”