Teenager Patrige Chimwendo and the experienced Lexi Loizou sped to victory in the 18km feature events at the BDO Hayterdale Classic Trail Run just outside Addo on Saturday.

The event, which was supported by 12km and 6km distances for intermediate and novice participants, started with the tough 6km ascent of the Zuurberg Pass.

Nineteen-year-old Chimwendo, who matriculated from Alexander Road High in Gqeberha last year, crossed the line at Hayterdale Trails in the foothills of the mountain range in a time of 1:43:09.

Although he has mostly concentrated on road running, Chimwendo has developed a taste for the trails and was impressed with what the route offered.

“I’ve done some trail running in the past and have always enjoyed the experience,” said the winner of last year’s 12km Mountain Challenge at Crossways. “So when I get the opportunity I make sure to grab it.

“It was the first time I have been in this region and it was good to discover these trails, which had plenty of variety. It was memorable.”

Chimwendo, who placed third in the U23 category at last year’s South African duathlon championships, soon found himself in a small group at the head of affairs. 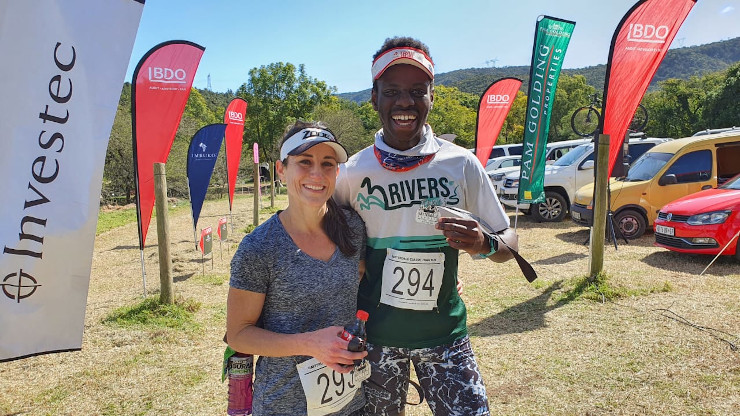 “The course was quite steep from the outset, but I enjoyed the climb and was able to up my pace gradually, even though it got steeper and steeper,” explained the Gqeberha runner.

His relentless pace drew him clear of his opponents and saw him pass the first waterpoint after 7km one minute ahead of his closest challenger.

“I didn’t hear any time gaps after that but from that point on I was able to hold my pace, averaging about five-and-half-minutes per kilometre.

“Towards the end, with about 2km to go, I decided to push a little harder to make sure I held my position.”

The former Alex pupil said he felt comfortable throughout as he was currently preparing for a training camp in Kenya.

“I’m raising funds to go to Kenya in September, just before the season starts. So I’m busy with a lot of preparation for that.

“This course had all the elements you want in a trail run and I was happy to feel comfortable on the ups, downs and technical sections. The organisers really did an amazing job.”

After being forced to take time off to recover from injury, Loizou was thrilled to be back in the pack and duly finished on top of the women’s podium in 1:43.56.

“Unfortunately I was off for quite a while but it is great to be over that and I look forward to doing more of these events,” said the versatile athlete, who also competes in mountain bike and triathlon races.

“I’m now able to train normally again and am so happy be back in action.”

Also a first-timer at Hayterdale, Loizou said she fell “in love” with the event, which features 600m of elevation.

“I’m notorious for getting lost on these sorts of runs because often you can be by yourself, but this route was so well marked.

“It had a bit of everything, which I always appreciate, including some challenges like that first climb,” said the Gqeberha athlete who clocked the second fastest time on the day.

“But luckily I don’t mind the uphills and after a few kilometres with a small group I was able to build a gap on the rest of the women’s field.

“I felt really comfortable throughout and it was nice to get the win and to have such a great route experience.”