The SPAR Wheelchair Wednesday campaign is celebrating its 10th anniversary by broadening the scope of its market to include the visually impaired sector of society this year.

Managed by the Association for Persons with Physical Disabilities Nelson Mandela Bay, the project aims to make a difference in the lives of the disabled by donating wheelchairs and raising awareness of the daily challenges they face.

In the second weekly rollout yesterday at SPAR Fig Tree in Charlo, participants spent 67 minutes in a wheelchair to complete the everyday tasks set for them.

SPAR promotions and events manager Alan Stapleton said they had worked towards extending their influence to other sectors in recent times.

“For many years we focused on those who needed wheelchairs, but last year we added the collection of walking aids for the Amputee Support Group and now we are taking it one step further by incorporating the Nkosinathi Foundation to embrace the visually impaired,” he said.

“The helpers during Wheelchair Wednesday month wear simulation glasses, which give them a feel what it is like for a person who is going blind.”

The Nkosinathi Foundation has been operating for eight decades after a group of blind people who felt vulnerable and alone got together to help each other – and with a mission to break the barriers of blindness.

Anne-Marie Stephenson, the foundation’s resource development officer, said they had been able to assist thousands of blind and partially sighted people in Gqeberha. 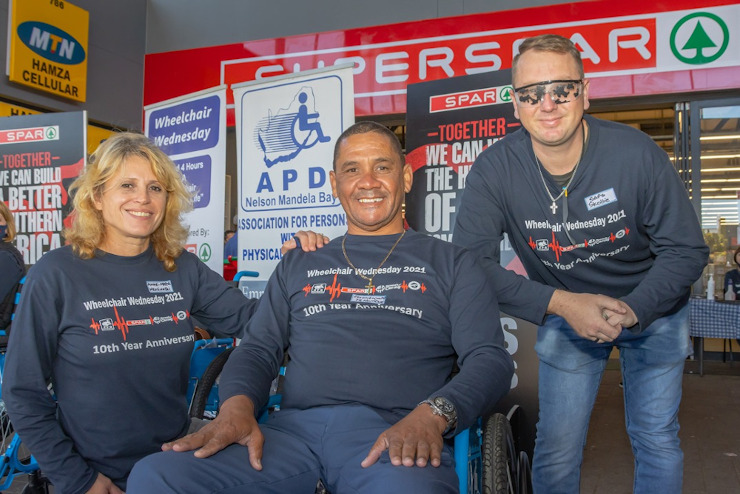 Nkosinathi Foundation resource development officer Anne-Marie Stephenson with colonel Tony Nomdoe (in the chair) and constable Delandro van der Kuil of the Kabega Park Police Station at the Wheelchair Wednesday launch. Van der Kuil is wearing the simulation glasses to experience what it is like to be visually impaired. Photo: Leon Hugo

“Nkosinathi means ‘God is with us’ and God certainly has been with the foundation over its 80 years of existence,” she said.

“The value of support groups is well-known and this group grew into an 80-year-old body that is a registered non-profit organisation.

“We would like to thank SPAR and APD for inviting us to join this amazing campaign; we really appreciate the sharing. We all have to work together to make the world a better place and that includes the disability sector.”

Stephenson said Nkosinathi’s approach was to focus on the rehabilitation of the person who was affected as opposed to doing research into blindness.

“We work to try to integrate people back into communities and to find employment because it’s a very lonely place when you are blind,” she said. “We need to help them get their self-respect back and we need our communities to respect them.

“The problem is that society creates the barriers because sometimes we don’t make our amenities user-friendly for the visually impaired.

“So the foundation has a mission to educate our communities and to help them understand what it is like, both physically and mentally, to be visually impaired.”

“Nkosinathi is working towards creating awareness of losing your sight as 80 per cent of blindness can be prevented by early detection.

“With the help of an overseas funder we are doing a lot of early detection screenings, in the metro and further afield, to help to discover conditions that can save a child’s eyesight.”

She said the simulator glasses used during the Wheelchair Wednesday campaign would give participants a good idea of what it was like to be visually impaired.

“It will make you aware of how frustrating it is and how vulnerable you feel from both a physical and psychological aspect.

“Then you will begin to understand how any disabled person feels and perhaps this will help in some way to change the way the world sees blindness.”