Patrick Wilkie gave a vivid demonstration of the importance of prosthetics or walking aids when the SPAR Wheelchair Wednesday campaign for 2021 was launched at SUPERSPAR Hunters earlier this month.

Wilkie, who has had both legs amputated below the knees, is the vice-chairman of the Nelson Mandela Bay-based Amputee Support Group.

To demonstrate just how those who have mobility issues are affected, Wilkie began his demonstration in a wheelchair. He was then provided with his prosthetic legs, which he fitted and rose from his wheelchair to move around like an able-bodied person.

NMB councillor Malcolm Figg, who took part in the Wheelchair Wednesday exercise, said it was “a highly emotional experience” to see a man in a wheelchair suddenly able to walk around normally.

“It really was amazing and it highlighted the importance of how we need to care better for those in our society who have these sorts of challenges,” he said.

Creating awareness about the needs of people with disabilities is at the heart of the 10th Wheelchair Wednesday campaign, which is placing volunteers in wheelchairs for 67 minutes each Wednesday this month to demonstrate the difficulties some people face daily.

The project has grown in recent times after reaching out to the Amputee Support Group last year and including the Nkosinathi Foundation for the visually impaired as well in 2021.

ASG chairman Brian Paddey said it “is incredibly helpful” to be part of Wheelchair Wednesday. 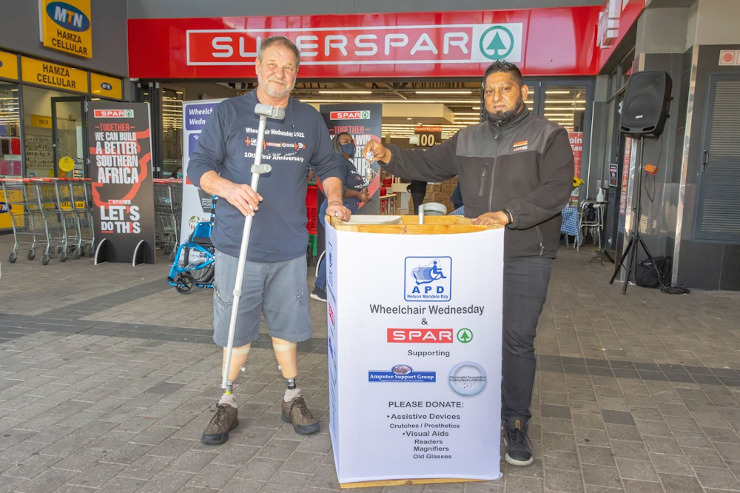 The aim of the organisation, he added, was to offer counselling and material support to amputees and their families.

“We collect used crutches, walkers or any kind of aid which can assist with mobility,” he said.

“What happens is that people may have an injury which requires a moon boot or a crutch, but when they have recovered those items often just gather dust in the garage.

“You may think these no longer have any value but there is a massive need for walking aids for people who may not have medical aid and cannot afford those items.”

Paddey said the exposure they received from Wheelchair Wednesday was priceless.

“It’s a process we are going through and the main thing is to create the awareness of what we are doing, which is being achieved on the Wheelchair Wednesday platform.

“To have the visibility of the SPAR containers at participating stores in which the public can place walking aids is a massive opportunity and just to be part of the whole exercise is hugely important for our long-term goals.”