Telkom league a chance for Madibaz netballers to grow

Two SPAR Madibaz netball players received a golden opportunity to develop their careers when they were part of the Eastern Cape Comets team that played in the Telkom Netball League.

The student-athletes were Juanita van Tonder and Kaylin Coetzer, who helped the side to finish sixth in the national competition that ended earlier this month.

It was contested in Pretoria from September 5 to 12 and at Sun City from October 9 to 17.

Van Tonder captained the side and said it was an “honour and a privilege” to be in charge of the outfit.

“The girls in the team made it so easy and fun for me. It was a joy to be able to share the court with them.”

However, she admitted that it took them some time to find their rhythm as a unit.

“In the first leg of the tournament our team didn’t do as well as we wanted to and we struggled a bit to find each other on court,” said Van Tonder, “but in the second leg the Comets excelled and I’m really proud of everyone.

“Although we didn’t reach our end goal to be in the semifinals, I know that from here on we will only work harder and become better together.” 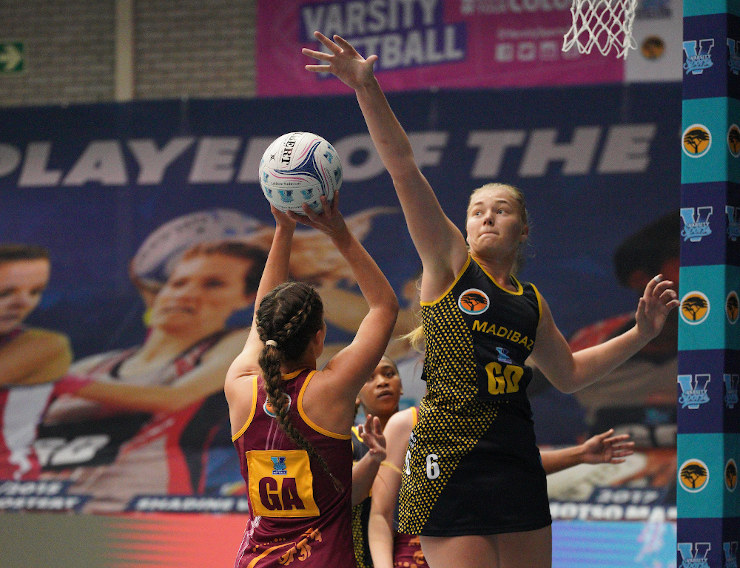 She said the time at Sun City, marked by her receiving three player of the match awards, was a highlight for her.

“I had the time of my life there, enjoying what I love most with people who are near to my heart.

“Also getting the awards was a highlight for me as I could almost see and feel the growth in my personal play on court.”

Along the way, important lessons were learnt, she added.

“The main thing is that you must always give one hundred per cent in whatever you do because you don’t want to live with the regret that you could have done more.

“And also to never stop being ‘too kind’ to others, because that’s what the world needs.”

The Comets captain said a national competition such as the Telkom Netball League was an extremely important platform for Madibaz players to showcase their ability.

“It is great exposure for us and we can only learn and grow so much from that.

“It is a really tough competition where we were able to gain extra experience for us to grow stronger as individuals and to be able to take that into the Madibaz team going forward.”

Coetzer, who was playing for the Eastern Cape team for the first time after representing SA U21 in the same competition last year, said it was an interesting experience.

“There were a number of challenges because, firstly, we had to learn to gel as a team, not having had any experience of playing with most of the other members,” she said.

“But it taught me how to adjust to those circumstances and to make the best of the situation.

“It definitely pushes you as a player, testing our bodies and minds, and just to see how we improved over the period of the two legs, I feel we definitely did ourselves proud.”

Another adjustment was being in a secure bio-bubble environment and away from their families, but Coetzer said they used the opportunity to create a “family” environment around the team, which helped them to manage the pressure of proving themselves in top-flight netball.

A number of Madibaz players also turned out for the Eastern Cape Aloes team, which won the B section.

The side was captained by Jody Vorster and other players in the squad were Siphosethu Kilani, Noluthando Maliehe, Philene van Niekerk, Britney van der Merwe and Kayleigh Hill, who played only in the first leg of the league.