Despite tough challenges, South Africa’s Madibaz water polo contingent returned from the recent Olympic Games stimulated by the experience of competing at the highest level.

Delaine Mentoor, who received plaudits as the only female head coach at the Games, and players Meghan Maartens and Ashleigh Vaughan were part of the country’s first women’s water polo team at what is arguably world sport’s most iconic event.

On their return the trio agreed that the exposure they received would be hugely beneficial for water polo in SA.

Mentoor described it as the “experience of a lifetime”.

“It’s very difficult to put into words, but the challenge, as tough as it was, was all worth it,” she said.

“To compete against the best in the world and to be part of the first women’s team to represent the African continent in water polo at the Olympics is just incredible.

“The lessons we took from this event were invaluable.”

She added that the team’s goal was to grow better with each game. 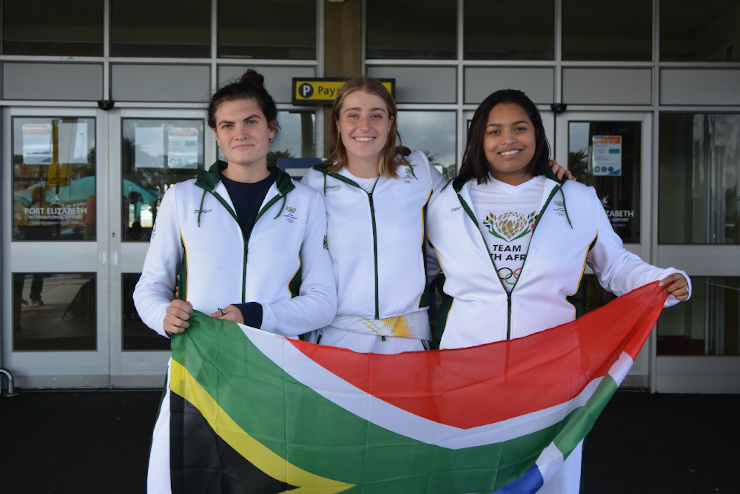 “That was achieved and defensively we got better, which showed in our last match when we limited the Australians, with great goalkeeping from Meghan, who had the game of her life.

“We learnt that we needed to work on our attack and, with the current group of ladies and the national programme, we can achieve that.

“Players like Ashleigh [Vaughan] showed that we can put the ball in the back of the net past some of the best goalkeepers in the world.”

Mentoor felt the exposure would help them develop the game at all levels.

“It excites me so much and I cannot wait to share the knowledge and experience I have gained to grow the programme at our club and obviously in the country.

“The contacts and opportunities we have following the Games are massive and I look forward to the road ahead.”

Mentoor is now focused on the Junior World Championships (U20) in Israel this October.

For Maartens, the Olympics experience still hasn’t fully sunk in and she said her memories would last a lifetime.

“The only words to describe this experience are ‘amazing’ and ‘beautiful’,” she said.

“The wow factor was walking among all these athletes who work so hard to get where they are. And it was so crazy to think that we were there too.

“Mixing with so many famous people was fantastic – everywhere you looked someone was taking a photo with someone else.”

She acknowledged the challenging nature of the competition, which taught her more about her game.

“I have walked away with a lot of experience and knowledge, and with a different understanding of certain situations.

“The best memory in the pool was the Australia game. We didn’t win, but against one of the powerhouses of the world in our hearts it felt like we had won.”

Australia won 14-1 but only had the measure of their opponents in the second quarter when they netted six times in response to a single goal by Vaughan.

Maartens said the Games had motivated her to never give up on her dreams.

“I’m excited to start training hard again when I get back and I’m more motivated than ever.”

Vaughan, who said scoring the first goal for her country at the Games was a personal highlight, also acknowledged the privilege of seeing some of the world’s best sportsmen and women in action.

“What an amazing experience it was,” she said. “The hard work put into the Games and sacrifices people had to make to compete; it was really fantastic to see athletes performing at their peak.

“The main thing I learnt is that there is no room for error. There’s a lot we have to work on as a team and I feel there is always room for improvement.