New SPAR Madibaz captain Mothira Mohammad is relishing the opportunity she has been given of leading the team in the forthcoming Varsity Netball tournament.

This year’s edition will be played in Stellenbosch at the Coetzenburg Indoor Centre from August 21 to 30.

The 22-year-old Mohammad, who grew up in Humansdorp and still lives there, takes over the leadership role from the long-serving Jeanie Steyn, who is no longer eligible for the competition.

She knows there are some tough battles ahead against some of the best players in the country, but she and her teammates are ready to embrace the opportunity.

“It is a great privilege for me to be part of the SPAR Madibaz Netball Club and to be appointed captain of the team,” said Mohammad.

“I see it as a new challenge but I believe that with the support of my team it is going to be an exciting adventure for us.”

She added that she was fortunate to still have Steyn in the mix as someone she could speak to about her role in the team.

“Jeanie has definitely helped me to prepare for the tournament,” she said. 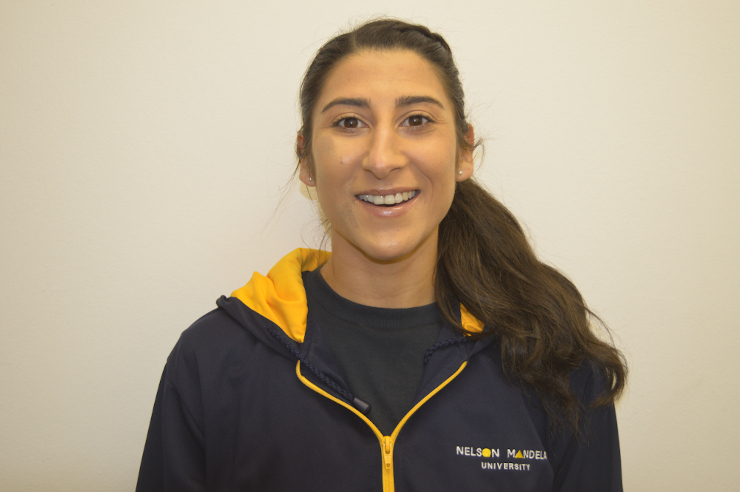 Mothira Mohammad has been named as the new captain of the SPAR Madibaz team to take part in the Varsity Netball tournament from August 21 to 30 in Stellenbosch. Photo: Anathi Dzanibe

“I still ask for her advice as I value her opinion, both as a netball player and as a person. I appreciate all the guidance she has given me in this new role.”

Mohammad, who attended Stulting Primary School in Humansdorp and Brandwag High School in Uitenhage, said netball had been part of her life since a young age.

“My mom used to play netball in her younger days, up until her thirties, so it has always been one of the sports in our family,” she said.

“I can remember starting to play the game in Grade 1 and it has become a huge passion for me.”

Mohammad, who plays wing attack and goal attack, has been part of the Madibaz elite squad for four years.

She will be competing in her second Varsity Netball campaign this month, continuing a pattern of receiving recognition in the sport.

“The highlight of my career was in 2017 when I was selected by Netball South Africa to take part in a development programme,” said Mohammad, who played for the Eastern Cape provincial teams from U12 to U18 and for the Nelson Mandela Bay U21s two years ago.

She recognises the roles that a number of people have had in her development as an elite player.

“Firstly, Madibaz coach Lana Krige has always believed in me. I have progressed at the varsity from sitting on the bench to now playing in the team.

“She has helped me to grow as a netball player through her amazing coaching skills, but also because of the caring attitude she has towards all her players.

“And then there is the support I have received from my mother, who gave me the determination to work hard to get to where I am today.

“Last but not least, my gratitude goes to the SPAR Madibaz Netball Club and our manager Melinda Goosen for giving me access to high-performance facilities.”