The Queenstown Girls’ High School team retained their title in the East London Inland section of the SPAR Eastern Cape Schoolgirls Hockey Challenge with a hard-earned win over Aliwal North in Queenstown yesterday.

On another day of exciting and competitive hockey, the defending champions won 2-1, holding off their opponents when they threatened to make a comeback with 10 minutes remaining.

The Queenstown tournament was the third of five playoff legs in the annual event and, thus far, GHS will join Collegiate and Clarendon in the provincial finals in Port Elizabeth on July 31 and August 1.

Each leg caters for about 100 players and further regional playoffs will take place in Grahamstown on Sunday and George on May 30.

GHS and Aliwal North won their respective pools yesterday to qualify for the final played over 20 minutes.

The nature of the format often makes for unpredictable results, but GHS put themselves in line for the title when they went 2-0 ahead, with both goals being scored by Anuja Jomon.

The Aliwal defence were not able to plug the gaps and twice Jomon found herself unmarked on the left post to slot the ball into the net.

However, Aliwal never stopped trying and when they broke upfield and eventually scored through Tine Pretorius from a penalty corner, the game was still in the balance. 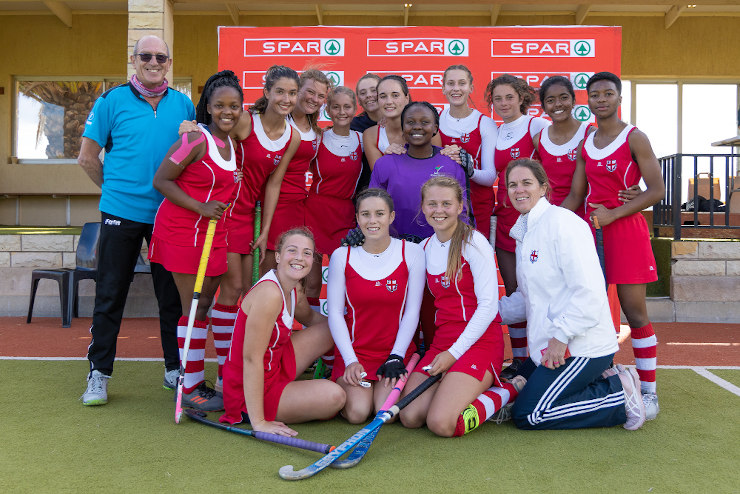 But GHS were able to keep their nerve to triumph in another competitive tournament.

Coach Nicolette Stone said there was great excitement at the final result after they qualified for the provincial finals a second time.

“It was something the girls have really worked hard to achieve and it was a tough day of hockey. There were some really good teams in the tournament, especially Aliwal North and Hangklip,” she said.

“To qualify for the final is such an awesome achievement because it’s hard to play for only 20 minutes, with no room for error and not much time to regain composure when you make a mistake.

“The final provincial event to be held at Collegiate is one of the best tournaments to attend, so we are obviously looking forward to that.”

She acknowledged the role played by SPAR EC to make the hockey challenge so special.

“We won an awesome SPAR voucher, while throughout the day SPAR spoilt us with lunch, snacks and refreshments. This is such an amazing tournament with a great vibe every time.”

It was a good day on the field for GHS because their U16 side, who filled in for Burgersdorp, came third, defeating Hangklip in a penalty shootout.

Stutterheim came fifth after a 1-0 victory against a spirited Templeton outfit, while De Vos Malan were seventh following a 2-0 result over St Christopher’s.