Since a devastating black frost roughly 10 years ago, Habata Agri have perfected the practice of guarding their crops against the icy elements.

The Sundays River Valley-based farming concern was hit hard then and production manager Gary Webb explained that, despite the cost, it was too great a risk not protect their crops at this time of the year.

“The risk is just too big not to cover them up because if you get black frost, it’s a write-off,” he said. “You have to dig everything up and start again.”

The labour-intensive process, which starts as soon as planting begins, is one that has a number of additional benefits and ultimately results in a greater yield.

“Where we are, we get a lot of wind. Small plants don’t like the wind so crop guard also protects against that.”

He said the increased temperature under the thin nappy-like material also resulted in quicker growth of whatever crops were placed underneath.

“All your early plantings like butternuts, watermelons and spanspek are put under crop guard. Although you can put anything under it, it’s mainly for produce that’s sensitive to frost.”

The covering, also known as a frost cover, can save up to 10 per cent of crops and also prevents having to replace damaged produce.

“We’ve seen over the years when you don’t have the cover you have to replant about three or four times and this helps avoid that.”

Webb said they had begun rolling out crop guard at their Addo-based operation last month and would complete the process towards the end of September.

Although there was the option of using machinery, he said they did it by hand as it was easy to rip the thin material if it was not done correctly.

The first step is to put down mulch under a layer of plastic and cutting holes where the crops are planted.

“Near each plant we put an arch of wire into the ground and the material is then pulled over.

“The material is rolled over rows that are roughly one thousand metres in length. Then we take a spade and cover the ends with soil so that the wind doesn’t get underneath and blow through.”

Webb laughed when he recalled their early ventures into the practice.

“We used to cut little blocks of material and put them over each plant.”

He said he was confident that, after years of fine-tuning, they now had it down to a fine art. 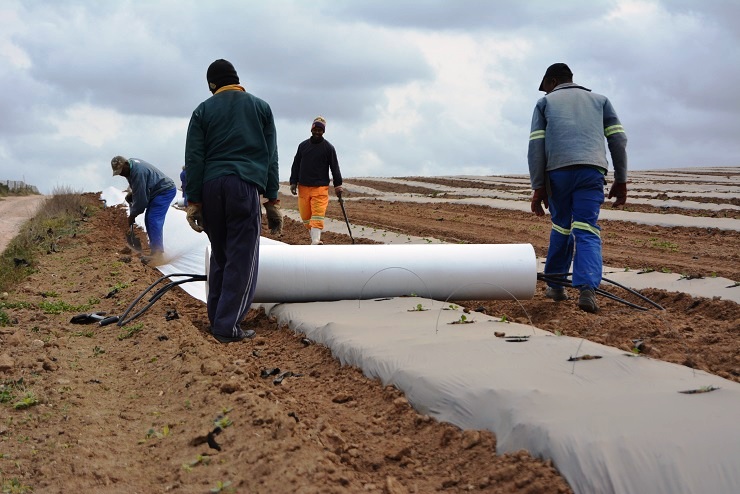 Habata Agri started rolling out crop guard last month and expect to have the process completed by the end of September. Photo: Full Stop Communications