University of Johannesburg soccer star Amanda Mthandi is over the moon at her selection for the national team to compete in the Africa Cup of Nations women’s tournament in Ghana, starting this weekend.

The 22-year-old wing will make her debut for South Africa during the event, which gets under way on Saturday. Banyana Banyana play their opening match against Nigeria on Sunday.

Mthandi was on the fringe of national selection this year, being included in an expanded squad, but she failed to make the final cut for an earlier tournament.

“This time I was excited to make the provisional squad for the Cup of Nations and then, when my name was read out in the final squad, I did not know how to react.

“I was ecstatic but at a loss for words,” said the second-year transportation management student, who lives in Kibler Park in Johannesburg.

Having been rewarded with the ultimate selection, Mthandi said she was eager to make an impact at the Ghana tournament, feeling she added something new to the national squad.

“I play as a wing, but I believe I have the sort of versatility in my game which can add some value.

“For example, I can play as a holding striker or I can adapt to the requirements of playing up front, running onto balls in an attacking position.”

One of her main objectives at Afcon is to score her first goal for her country.

“Obviously as a team we want to qualify for next year’s World Cup, but my special aim is to net one for Banyana Banyana,” said Mthandi.

“I believe the experience I will gain playing at this level will help me to improve as a player.”

The top three teams from the Afcon tournament will qualify for the World Cup to be held in France next year.

Mthandi’s national selection caps off a memorable year, the highlight of which she said was winning the University Sport South Africa tournament in Port Elizabeth in July.

“That was a really good week for UJ soccer, and especially for me, after I was named player of the tournament and ended up being the top goal-scorer.” 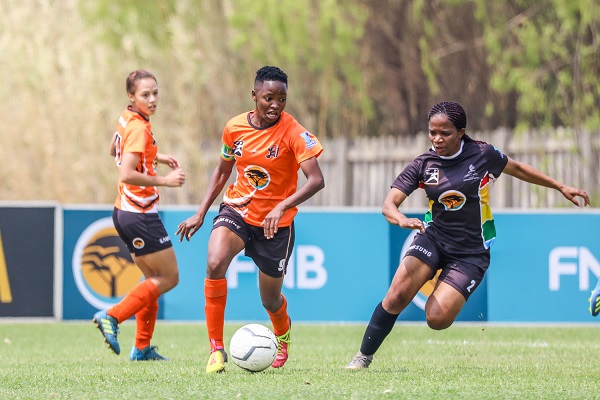