Habata Agri planted their first citrus crops of the season this month, with the nova mandarins expected to be ready for production four years from now.

“We started it all a few weeks back and have planted a 35-hectare block,” he said, explaining they would plant a further 28 hectares of cambrias and 10 hectares of lemons.

He said the novas were well suited to the windy region and, after great success in the past, they had made the call to replant.

“We’ve planted quite a lot before with great success. The reason we’re planting more is because they can handle the wind a lot better than other mandarins.

“Another nice thing about the novas is that they’re a hard fruit and usually pretty blemish free.”

Done by hand, the planting was in essence the easy part as it was followed by years of maintenance, according to Webb.

“You can’t just leave the trees once you’ve planted them. They have to be fertilised and you have to make sure they’re kept clean and free from weeds or pests.

“We send a scout every day to check how things look and we’ll probably spray for worms about every two weeks.”

He said this was crucial as the young saplings could be devoured in just one day should the creepy-crawlies go unnoticed.

Prior to this, Webb said they did an application of PVA paint, which guarded against pesticide and sunburn. Copper, which they added to the paint, also helped protect against phytophthora, otherwise known as “root rot”.

“We paint the stems for a couple of reasons,” he said.

“As long as the bark is still green, it’s susceptible to sunburn. Also, the herbicide we spray, if it touches the green part, it gets taken up and isn’t good for it.”

He said as the plant aged, the stem would turn brown and be protected by the canopy of leaves.

The trees would only start yielding consumable fruit after four years, though Webb said year three could also be productive.

“You could start picking in year three but it wouldn’t be the best of the crop.”

Fruit from the 30 000 trees would largely go to the international market as Webb said there had been great global demand.

“There is a market for mandarins all over the show. The Middle East, specifically, asked for novas and cambrias.” 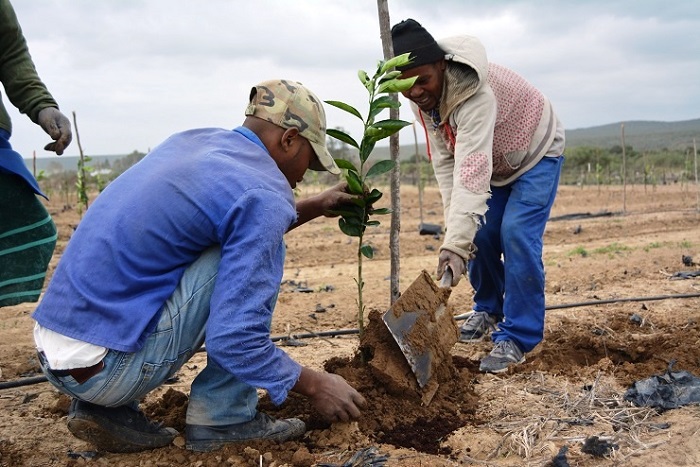