Mark and Adele Hunter-Smith made the most of their move to Sardinia Bay Golf and Wildlife Estate and built a home that is centred on their desire to lead a green lifestyle.

The decision to go green was driven by Mark’s wife and he said the house, which is a mere 10-minute drive from town even though it is situated on the outer limits of Port Elizabeth, had been designed to be as environmentally friendly as possible.

The couple – who live largely off the grid – explained that they recycled waste, used only natural cleaning products and made use of renewable energy to reduce their environmental impact.

Adele has made a point of using biodegradable cleaning products throughout the house. Everything from their handwash to laundry detergent and bleach is environmentally friendly.

Their house on the estate used many of the natural materials allowed by the architectural guidelines, including stone and timber.

“The treads on the staircase have been done using used timber, so where possible we made sure to use recycled materials,” said Mark.

“We also made sure to include rain water harvesting in the design and we’ve recently converted to solar energy.”

He said the most noteworthy feature of the house was the 40 000 litre storage tank that captured water from the roof run-off.

“All the run-off is captured and feeds into eight 5 000 litre tanks in the basement.”

“All our water is harvested, there’s absolutely zero wastage.

“The tanks fill much quicker than many people expect. It takes just one full day of rain for all 40 000 litres to be filled.”

The mother of two said the family could survive on the water for roughly three months.

“We use this water for everything from eating to drinking, washing and maintaining our swimming pool,” she said. “If we didn’t have the pool, the water would last a lot longer.”

Mark said he felt many were put off going green due to the high prices involved.

“Without regulations enforcing people to reduce their carbon footprint, people shy away from spending any more money than they have to.”

Adele acknowledged the cost involved with building a “green” house, but said there were other, less expensive ways to go.

“Building this house meant we had a chance to plan for it – we have the tanks in our basement and a full solar system installed.

“Those systems are on the more expensive side, but you can start small, especially with water harvesting.

“Recycling is another good place to start – it’s simple and an easy habit to form.” 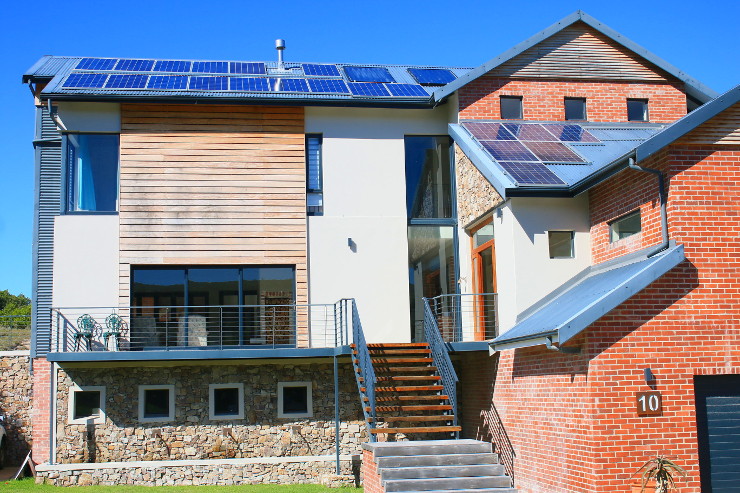 The Hunter-Smiths’ house on Sardinia Bay Golf and Wildlife Estate in Port Elizabeth was designed to be as environmentally friendly as possible. Photo: Full Stop Communications