Residents at the Sardinia Bay Golf and Wildlife Estate on the outskirts of Port Elizabeth have been actively involved in introducing a number of additional security measures.

Yanesh Naidoo, who moved into the estate in 2015 with his wife Veronique, oversees the newly established security committee.

“We started at the beginning of the year with the purpose building on the measures already in place,” he said, pointing out that the estate’s 24-hour security was one of the major drawcards for them when purchasing.

Naidoo said when they looked at ways to add value, the committee felt the gatehouse at the estate’s entrance would be a good place to start.

“The first thing we did was to upgrade the level of security by stationing an armed response officer at the gatehouse alongside the usual night shift guard.

“We’ve also linked all the residents’ alarm systems to the gatehouse. If a panic button is pressed or an alarm gets set off, the security personnel will immediately be alerted.”

Naidoo said having an armed guard on duty would improve the overall response time to emergencies and the step had been welcomed by residents.

He said stricter access control measures have also been implemented to adequately deal with the movements of people through the estate.

“This includes having all permanent staff members registered and issued access cards.

“We are also closely monitoring the movements of construction workers on the estate. There is a sign-in and sign-out procedure, with a cut-off time of 6pm,” he said.

“These really are some positive changes, but we hope we can go a couple of steps further.”

According to Naidoo, the committee still had a number of ideas they were playing around with, including and upgrade to the game fence and CCTV system.

In terms of the latter, he explained they would piggyback on the fibre optic network that was recently installed.

“Because we now have a state-of-the-art system, we’ve been engaging with various parties to provide cameras throughout the estate.”

He explained that the idea was to install these at various points with the feed monitored by the guards at the entrance. 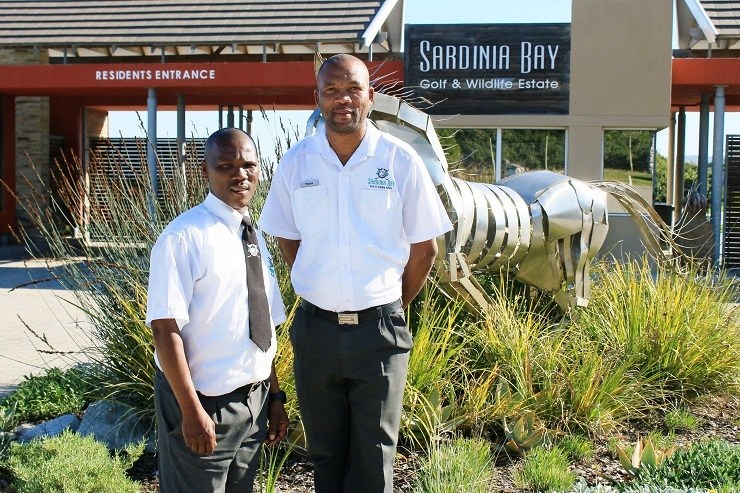 Clinton Botha (left) and Masibulele Mapu (right) are a familiar sight at the Sardinia Bay Golf and Wildlife Estate as they are part of the security personnel at the gatehouse. Photo: Full Stop Communications