An experiment with the cultivation of watermelons at Habata Agri’s Western Cape operations has proved successful, paving the way for possible production if required.

Although the conditions differ vastly from the Addo region where the bulk of the company’s watermelons are grown, operations manager Gary Webb said they had been pleased with the outcome of the Robertson trial.

“They get a lot less rain than we do and the soil is pretty stony,” he said.

“But that is not a major problem because cucurbits thrive in those conditions. The drier the climate the better for the fruit.”

He added that the fruit they had seen had been of a high quality and the plants seemed healthy.

Having grown an area of only five hectares, compared to the 200 hectares under cultivation at Addo, Webb said their objective had been to see if the trial would work.

“It is all good, but we have discovered that it is not slotting in at the right time,” he added.

“The feedback is that there is a clash with the harvesting of the table grapes, which is seriously labour intensive. So it doesn’t look as if we will pursue that course at this stage.

“But at least we know now that we have tested it and it can work if required in the future.”

Webb said the fruit grown would go to various distributors for their processing requirements.

Meanwhile the Addo operation would continue to export watermelons to the United Kingdom.

“We exported over 20 containers last year, but we did cut back on that this time,” he said. “However, we are still producing a number of containers for the overseas market.”

Brazil is one of the biggest exporters of watermelons, but there have been some technical problems in meeting the demands of the UK market.

Habata are exporting their Crisp Delight variety, a seedless watermelon which is very firm and has a longer shelf life than the average variety.

The watermelons are delivered to a processing company who cut up the fruit, preparing it for sale in various outlets, the chief of which is Britain’s largest supermarket chain, Tesco. 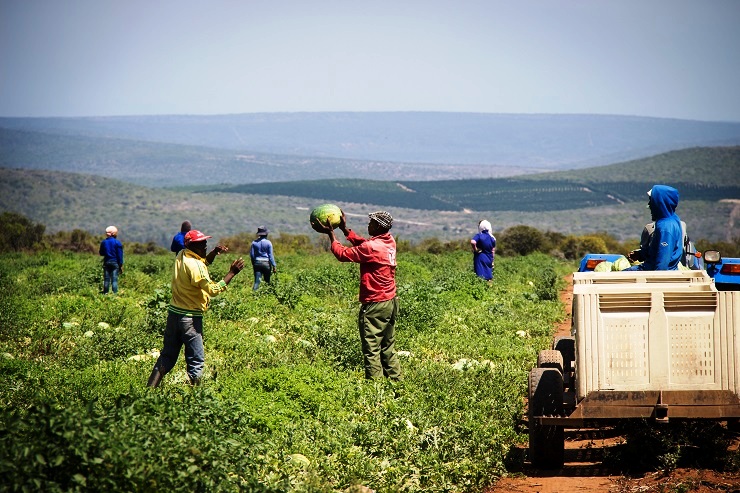 An experiment with growing watermelons in their Western Cape operations at Le Grand Chasseur near Robertson has proved successful for Habata Agri. Photo: Full Stop Communications