Cultivating navels under nets has been a positive step, with a marked improvement seen in the quality of the fruit.

This is the assessment of Habata Agri production director Gary Webb after the first picking of the citrus fruit at their Kirkwood operations in Sundays River Valley last month.

Although there is a cost factor to be considered, Webb said they were happy with the outcome for a number of reasons.

“When we saw the first navel crops cultivated under nets it was like chalk and cheese compared to what we had previously been able to produce.

“The fruit is virtually unblemished and you can see that it is free of any wind damage.”

The result of the nets, said Webb, was that they created a “whole new micro climate” for the trees.

“This is something that has proved extremely beneficial for the trees.

“For example they are not getting that direct sunlight, which obviously makes for cooler conditions.”

He added that the humidity was higher, which meant the trees grew much quicker.

“It really has improved the quality of the fruit, especially navels, which are prone to wind damage and blemishes,” said Webb. “We have had a much higher pack-out than before.”

He said the nets meant they were able to take out the windbreaks, which created space to allow them to plant more trees.

“We have increased the trees by 10%, which all do well, as opposed to with the windbreaks when production from the trees on the sides was not as good.”

Webb admitted that they had to consider the costs as it was “an expensive operation”.

“That is why we have focused on the high-end varieties, for example mandarins, where you receive more money per ton.

“This year we did 60 hectares, so we have 120 hectares in total under nets.

“I am sure we will see the benefits of that because it definitely works on the soft citrus – the fruit looks very good.” 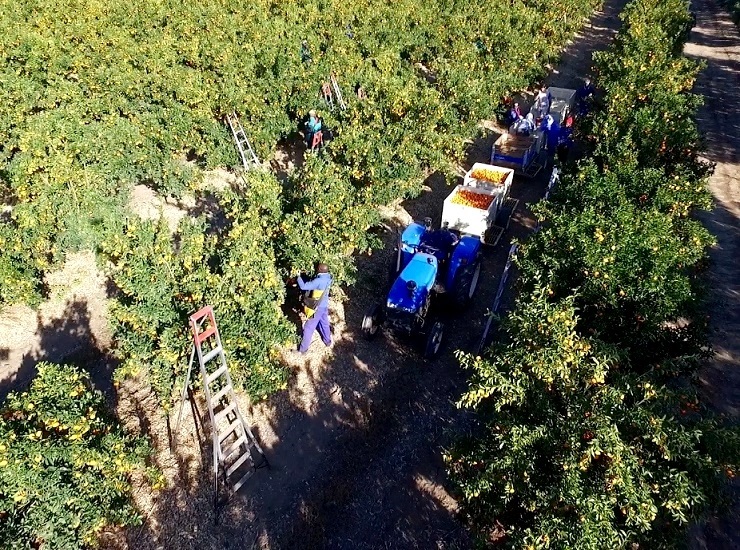 Cultivating soft citrus under nets has proved to be a step in the right direction at Habata Agri. Picture: Supplied