From an earlier approach of one size fits all, the pruning of citrus trees has been transformed into a highly technical operation to ensure maximum production from the crops under cultivation.

At Habata Agri in Addo, major producers of citrus in South Africa, the pruning staff have switched their focus to the requirements of specific trees rather than the previous blanket approach.

“Pruning these days is done much more selectively and according to the pruning needs of each tree,” he said.

“This has developed in place of the previous method when all the trees in an orchard were pruned in the same way.”

He added that a more selective approach was critical because of the huge contribution pruning made to “tree health, fruit quality and management ease”.

However, Viljoen said the basic reasons for tree pruning remained the same.

“The intent is to increase light throughout the trees, which leads to better growth, particularly of fruit which is set on the inside of the tree canopy.

“Getting rid of any dead branches means it will help lower wind damage on the fruit.

“It also ensures a better penetration of chemicals during the spraying season, which increases the control of pests, while the skirting of trees [about 40cm above ground] prevents low-hanging fruit getting chemical burn from weed killers.”

Other benefits of pruning were to make trees more accessible for picking and to open up roads in the orchards for vehicles to move without harming the yield.

He said the best time to prune trees was from the end of July to early October, while lemons could be pruned until the end of November.

“There is no specific age for pruning citrus trees. Pruning in some instances and varieties can be done at 12 months.

“Some varieties tend to get very dense at a younger age, while others can grow for two to three years before pruning becomes necessary.”

Viljoen said most of the pruning was done by hand.

“In some instances we make use of mechanical saws attached to a tractor. However, pruning by hand is the preferred option because it is much more selective and effective.” 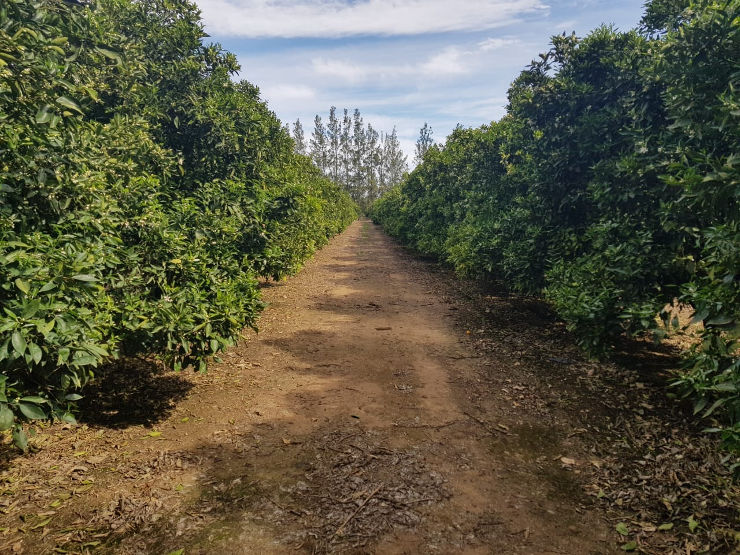 A view of the final product after Habata Agri’s citrus trees have been pruned. This involved a highly technical operation to ensure maximum production. Photo: Supplied