The new recreation centre at the Sardinia Bay Golf & Wildlife Estate was officially launched at a lavish function on Saturday.

Homeowners and other guests were treated to a spit braai, drinks and snacks while enjoying each other’s company.

This sort of convivial atmosphere lies at the heart of why the centre has been developed as an integral part of the estate.

The centre consists of a tennis court, swimming pool, built-in braai facilities, a veranda and an adjacent hall with kitchen.

It offers great added value to residents of the estate, says Ian Hughes of the Homeowners’ Association (HOA), who attended the launch.

“The estate offers a central point for us to be able to bond, socialise and have all our meetings while just having a good time,” Hughes said.

“It creates a community feel and that is important for a lifestyle estate.

“It is definitely an added asset [for residents] and adds much value to the estate.”

The centre also provided “headquarters” for communication between the HOA and the residents, said Hughes.

“There is a notice board in the centre where we will be able to post all relevant information pertinent to the residents,” he said.

On behalf of both the residents and the HOA, Hughes thanked the developer, project manager Matt Gibbs and Adele Hunter-Smith and Trading Spaces Port Elizabeth for the interior.

Construction of the centre started in the middle of last year and the tennis court was completed by the December holidays for owners to use over the festive season.

The main building and pool were completed by March this year and the centre had since been used for various functions, Gibbs said. But Saturday’s spit braai served as the HOA’s official opening.

Gibbs reserved special praise for Hunter-Smith for her input in the process.

“We roped her in to help out with the initial designs [of the centre],” Gibbs said. “The building was altered slightly on site so her input was right up front.

“Then when it came to the finishing touches, Adele gave up some of her time to monitor everything and ensure she was happy with it.”

Michelle Hughes said, “We wanted to welcome the homeowners to the recreation centre and show them what’s available for their use, while giving them the opportunity to meet and greet.”

The HOA handed out access tags to homeowners following the launch, the first being free of charge. 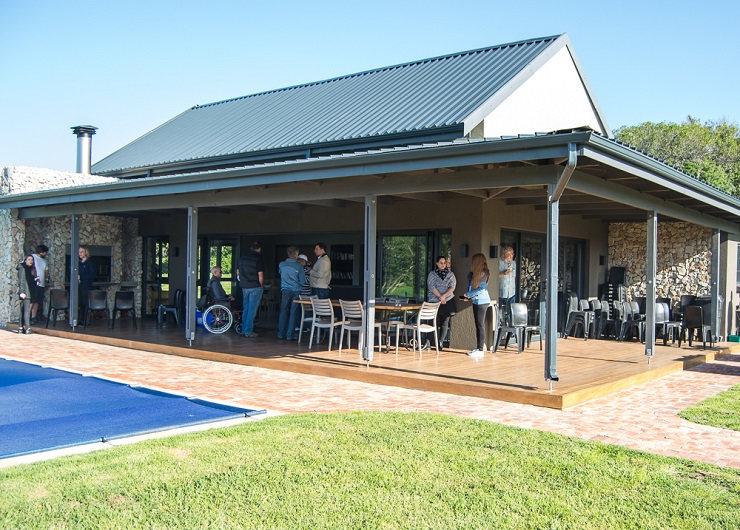