Golf has become a popular pursuit for a number of employees on Habata Agri’s Western Cape farms near Robertson in the Western Cape.

The four-ball were playing in the Robertson Primary School golf day and Botha said it was a wonderful opportunity to break away from their daily labours to support the local community.

Employed at the Goreeshoogte farm, Jacobs is a foreman, Snyman is a tractor driver and Noble works in the irrigation operations.

Botha said the farm was situated near the Silwerstrand golf course and years ago they became involved in the game. As a result a number of players were bitten by the golfing bug.

“Being near the course, they first began by picking up stray golf balls at the facility and then became involved in caddying,” he said.

“Like many caddies, they gradually became more and more interested in the game. They eventually started playing and have become proficient golfers.”

He said the trio were responsible for their own equipment and tried to play as often as they could.

“They are not members at the Silwerstrand Golf Estate but have joined a club near Worcester and they all have official handicaps,” added Botha.

“They have been playing for about five or six years and really enjoy the opportunity to play the game.”

He said their interest in golf was now rubbing off on their children and “it is really good to see the younger generation getting involved in the game”.

Botha added that the Robertson Primary School golf day was a good chance for Habata to give something back to the local community.

“It’s nice to be able to support an event like this and on the day David and Jeff ended in second place, so it was good for them to pick up a few prizes.” 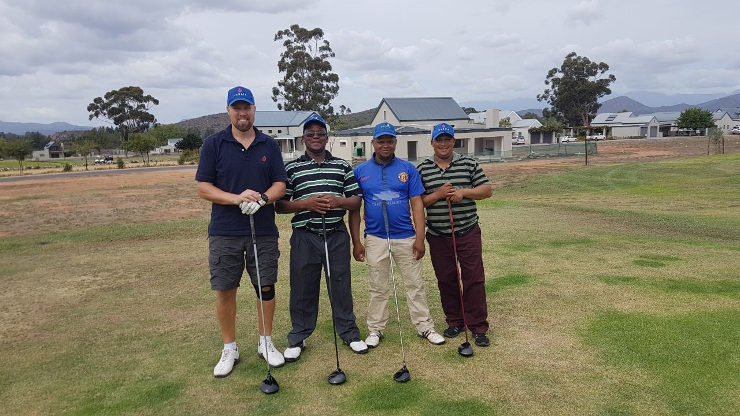 The Habata Agri four-ball which played in the Robertson Primary School golf day at Silwerstrand Golf Estate in the Western Cape at the weekend was, from left, Carel Botha, David Jacobs, Japie Noble and Jeff Snyman. Photo: Supplied