Innovative netting wire wind-protection units have resulted in encouraging growth for Habata Agri’s latest crop of novas, which are tipped to come into season much earlier than expected.

Gary Webb, operations manager of Habata’s Addo farms, said it was an indication of what could be achieved if you were able to protect the trees from the high winds prevalent in the area.

While some of the crops had been covered by overhead netting to create a productive growing climate, Webb said it had a cost implication.

“This method is a lot cheaper than putting up nets and I don’t think it has been done on a scale such as this before.”

The Habata employees created circular netting wire constructions around which fine netting was fitted to create what Webb described as a “micro-climate around each tree”.

The construction, secured by two poles, is inserted in the ground around the young trees, which are about one-metre high, providing protection against the wind.

“It is labour-intensive, but it is interesting to see how these trees [under protection] have developed much quicker than those on an adjacent land,” said Webb.

“They were planted at the same time, but the difference in size is like chalk and cheese.”

He said the protective unit broke the wind down completely.

“The wind really hammers the leaves, especially the new leaves, which are soft. If they are exposed they get burnt and just shrivel up.”

He added that once the circular construction was created by one team, a second team inserted it into the ground.

A number of different shapes were tried, including a triangular construction. But Webb said this required four poles and it was too time-consuming to be effective.

He added that the operation worked pretty smoothly.

“We were surprised at how much we could get done in a day,” he said.

“The main advantage of using the ring-like structure with two poles is that you can re-use them when the job is done.

“Once the tree has got a decent canopy you can take this off and use it for the next crop of trees you have planted.

“For instance, we are going to do 40 hectares of midknights later this year, so we will use these rings for them.”

He said the protection had shown the nova variety was capable of relatively swift growth.

“It always seemed that novas were a bit slow out of the blocks, but it was the wind that was setting them back.

“Now it looks likely that they will come into production a year earlier.” 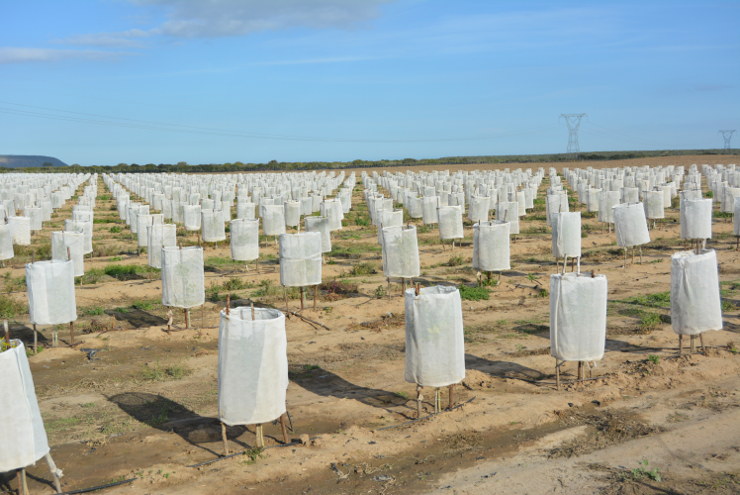