Habata Agri, in collaboration with the Langeberg Municipality, is helping to establish community vegetable gardens for workers and their households.

The citrus and produce company supplies the land and access to water, while the Western Cape-based municipality is helping with seed, plants and fertilisers for each garden.

“We want our workers to feel they’re part of Habata and share our love of farming and agriculture. It’s also an opportunity for them to generate income,” said Habata’s financial accountant Christie Rabie.

She added that this was the first time their company had become involved in a project of this nature in the province.

The garden would be worked on and maintained in the workers’ own time, while they would receive technical advice from production manager Jan Rabie.

His advice would include what to spray, how much water to give, general agricultural practices and how to ensure the crop remained healthy.

“Our section manager Hennie de Klerk is also an avid gardener and we hope the workers will learn from him too,” said Christie Rabie.

Equipment and tractors are also being supplied, along with wire and poles.

“Most of our workers have decided to form part of the project. Furthermore, their families can help them in the garden. From children to grandparents, old and young can lend a hand,” said Rabie.

Workers will decide how to divide the returns once the crop has been harvested, which will occur three to four months after planting. They will choose what percentage goes towards household use and what to sell.

Habata will help with the latter by finding relevant outlets for the fruit and vegetables, including green beans, pumpkins, butternuts, carrots, cucumbers, corn and beetroot.

“It’s also beneficial because they will learn more about vegetable cultivation and agricultural practices, gain life skills and get to know each other and how to work together,” said Rabie.

She added that this project would enable participating families to work together towards a common purpose and to supplement their income.

“We also hope it will improve relationships between workers, families and the managing parties. We would like to see how their strengths and potential are developed and exposed.

“We like to plough back into our workers’ lives, especially where everyone works for a common purpose. We also support our municipality’s initiative.”

Rabie said if they had enough water and other resources available next year, and if the current project was successful, it could be repeated. 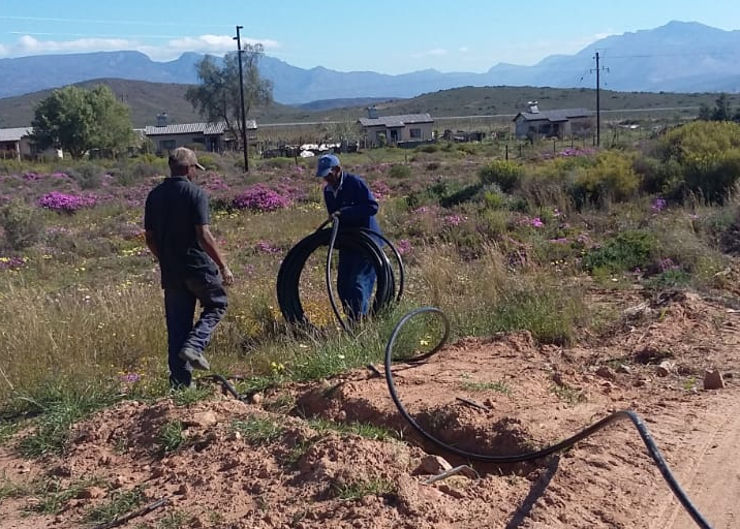 Irrigation pipes being placed for the establishment of community vegetable gardens for Habata Agri workers and their households. Photo: Supplied