Steven van Heerden won the Bestmed Satellite Classic cycling road race for the first time as he outsprinted his rivals in the 110km event near Hartbeespoort Dam in North West Province today.

The 25-year-old BCX rider, from Kempton Park in Johannesburg, held on in the final surge for the line to win in a time of 2:35:18. He was followed home by Jayde Julius (ProTouch) and Dylan Girdlestone (OfficeGuru).

After several near misses, he said he was thrilled to win his maiden Satellite title, as well as being pleased with his conditioning at this stage of the season.

“I’ve had a few years of bad luck in this race and it was great to be able to turn it around this time,” he said.

“We are now looking ahead to the Amashova [in Durban] next weekend and it’s nice to know the speed is there after putting in some hard work.

“Besides next week’s race, we are preparing for the SA track championships and the continental track champs early next year.”

He said the team had worked well together to set up his drive for the line, with Hoffman and Jooste part of an early breakaway before being caught by the peloton at the start of the Hekpoort climb, which comes in the latter stages of the race.

“There was quite a fast start and a lot of moves before it all came back together in the early part of the race,” said Van Heerden, who won the trapNET 360 100km event in July.

“Then Nolan and Chris were part of a breakaway group at about the 30km mark. I missed that move, but the bunch kept up the pace and we closed in at Hekpoort when they had a lead of just over a minute.”

He said a group of eight riders, including himself and Downes, then got away when ProTouch led an attack.

“We drove it quite hard to the top of Hekpoort and then we just carried on from there.”

With about a kilometre to go, Girdlestone made a move, but Van Heerden said he was able to stay with him.

“Brandon had set me up nicely and when Dylan attacked, I went with him and managed to get ahead. Jayde chased hard in the final stretch, but I was able to hang on for the win.”

The honours in the women’s race went to Cycle Nation’s Joanna van de Winkel, who showed her climbing ability up Hekpoort and then maintained her gap to the finish.

She crossed the line in 3:11:24, ahead of defending champion Carla Oberholzer (Demacon) and Clover rider Zanri Rossouw.

The 36-year-old Van de Winkel, from Northcliff in Johannesburg, only returned to serious racing this year after taking four years off to raise her family. She has two children and holds down a fulltime job at First National Bank.

However, she did ride in the Satellite Classic last year, when she also led at the top of Hekpoort, but was caught just before the final sprint to finish in second place.

This time she was part of a group which broke away from the main bunch after the 70km mark, including Oberholzer, Rossouw, Desray Neale Sebregts and Azulde Britz.

“When we came to Hekpoort I basically just rode my own pace and when I looked back at the top there was nobody on my wheel,” said Van de Winkel.

“This was the same as last year, but this time I was able to keep the gap and it was really good to take the win.” 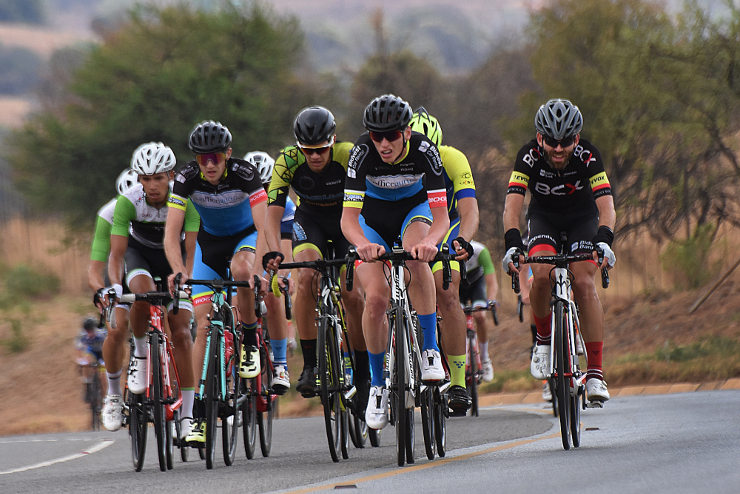