Habata Agri employees took a break from their daily routine recently to enjoy a special moment of celebration when they won the San Miguel soccer tournament for the first time.

The Addo farming operation’s team was one of several rural sides which took part in the annual event run by the South African arm of the Argentine citrus company in the Sundays River Valley region.

Initiated in 2014, each year San Miguel have brought out soccer experts from Argentina to hold three-day coaching clinics with the local players, before a tournament is played over the last two days of the week.

Having come close in the past, Habata captain and coach Thanduxolo Kula said they were delighted to win the tournament for the first time. They celebrated in appropriate style after triumphing in a penalty shoot-out.

He said they started playing soccer more than a decade ago to prevent players and children from slipping into harmful pursuits.

“We began the whole soccer thing in 2007 because we didn’t want people to resort to alcohol or drugs,” Kula said.

“We wanted to give them something healthy to do and we have been playing soccer ever since, taking on other local sides and competing in various tournaments.

“It was really exciting to win this tournament after we lost to San Miguel in the 2016 final, also in a penalty shoot-out.”

Habata operations manager Gary Webb said it was a wonderful avenue to provide an outlet for the company’s employees to enjoy some sporting camaraderie.

“They play a lot during the year, in friendlies and other tournaments,” he said.

“We provide them with the necessary kit, but everything else is organised by them.

“Thando, who is the coach and plays if they are short, does a great job of organising the team and making sure all the logistics are in place.”

He said they had organised transport for a group of supporters to attend the final against Sundays River Citrus Company.

“They all had great fun and, of course, winning the trophy was the cherry on the top.

“The players enjoy it and do take it seriously, and it’s a good outlet for them to get some exercise.

“They don’t compete in a formal league, but they do play most weekends so there’s plenty of soccer for them.” 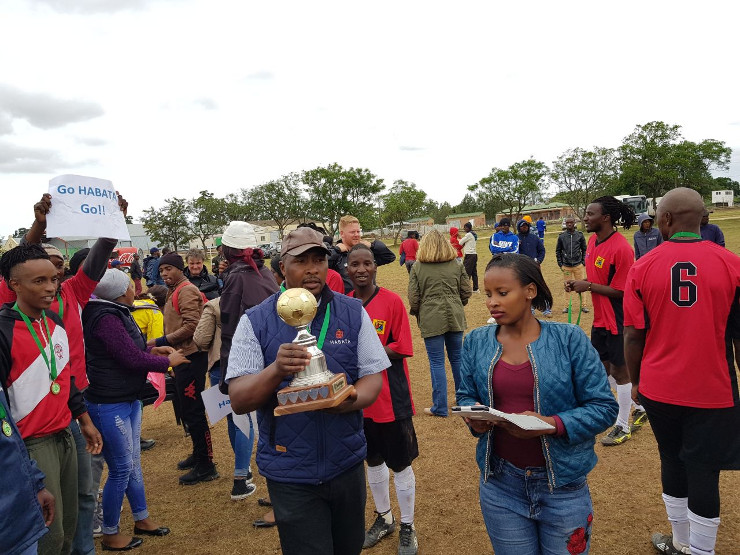