For Des and Sonel van den Berg, a married couple currently based in Dubai, it was “daunting” to have their home at the Sardinia Bay Golf and Wildlife Estate built while they were away.

“We went with our gut and to be honest today as we stand here I am one hundred per cent happy I selected Eddie as a builder,” he said.

“He was a superstar and a gentleman. We had some small complications, but Eddie was always very responsive [during the building process].

“When I was not happy about something I would pick up the phone and call him about what I wanted to change.

“He always had solutions, not always immediately, but he always found them.”

Des said what was most daunting during the process was coming back to the estate in December and seeing the house for the first time after it was built.

“That was probably the most nerve-racking part because the roof was already up and the house was virtually completely built.

“At that point if we did not like what we saw then it would have been scary. However, once we returned and saw the house we were completely happy and satisfied.

“We are looking forward to living on the estate in the future; it is an awesome estate to bring up children. My wife is pregnant with a girl – our second child.”

Living in Dubai where crime is minimal, Des said one thing he loved about the estate was its security.

“We are used to leaving our bicycles outside and we are used to living a lifestyle where we are not worried about any crime. That is why we chose this estate.

“This estate is absolutely perfect,” he added.

Des said he had the opportunity to choose the plot he wanted his house built on as well.

“There were quite a few plots to choose from,” he said. “We wanted to be close to the golf course, but not on it.

“We wanted our own privacy and we ended up choosing a plot that overlooks the golf course and watering hole. The tee-off green is playing away from us.

“We have the golf estate feel without living on the actual fairway. With the Sards Team, we designed the house in such a way we got the best out of the plot.”

Des aims to use the house as a holiday home for him and his family in the meantime, with the house expected to be completed by the end of April.

“We will hopefully come down again in December, when we will first officially live in the house.

“The idea is still to move here permanently. We would like our children to be schooled and raised in South Africa. We will most probably move back [to South Africa] in 2020.” 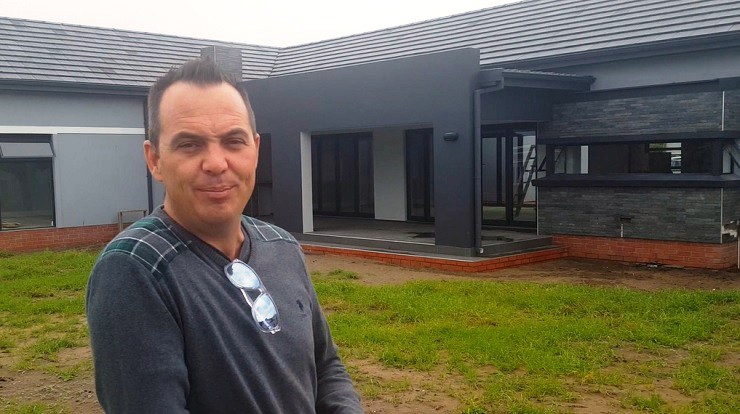