The Sardinia Bay golf course has undergone a significant transformation in the last four years, developing from a gentle mashie layout into a full-length course offering a proper challenge.

Admittedly, at just over 4 000 metres in length, the layout through the dunes and bush of the Sardinia Bay Golf and Wildlife Estate may not have the impact of a championship course, but it offers an examination many golfers will enjoy.

In particular, entry-level players will find the course, which comprises nine holes but 18 tee boxes, a delight to play. It requires a certain precision, but there is plenty of reward for the straight hitter, even if they are not that long.

With three new holes having been developed, coupled with a redesign of the old mashie course, the layout sees you negotiate four par-threes, five par-fours on each nine. It has a par of 64.

There is a good range of options from the tee boxes, and the siting of new tee-off areas on the second, third, fifth and sixth holes vastly alter the character of the holes.

It starts with a relatively gentle par-four, followed by the shortest of the par-threes, which has a tee box providing a fine view of the estate housing.

Wisely, the residences are set well back from the course and there is scant chance of any unwelcome golf ball intrusions.

The designers will tell you that the course has no bunkers, but they have not forgotten to strategically place some pleasing water features, which do a job of keeping the golfers honest.

There are greenside ponds on both the short second hole and the lengthy third hole, which has a justified rating of stroke one.

The third hole also has a fairway sloping to the right, where it is bordered by some penalising rough.

So the idea is to keep your drive up the left flank, but you have to be careful you don’t end up behind a well-placed tree which can spoil your approach to the green.

The sixth hole presents you with one of the longer par-fours at 370 metres. The dog-leg nature of the hole means you cannot see the flag from the tee and the fairway is guarded by bush on the left.

The best route is down the right-hand side, but a water feature does lurk dangerously close to the fairway, ready to drown any errant drives.

The final two par-threes are back-to-back and are the most testing of the short holes, ranging at around 170 metres to elevated greens.

The seventh is protected by bush on the left and trees on the right and, with a left to right slope, it requires a tee shot of some precision.

While a putt from the top side of the hole looks threatening, the pace of the green and a flatter area around the pin provide some relief.

The final par-three also calls for a good shot from the tee, but there is plenty of space to attack the pin. However, you play to an elevated green and a stray tee shot which ends up left or right will require an accurate chip to the putting surface.

The nine ends as it starts with a comfortable par-four, particularly from the ninth tee, which has plenty of space on the right.

The 18th tee box is tucked up closer to a line of bushes down the left side, but the generous fairway does provide an escape clause, even for those who shape it right to left.

The greens are well tended and possess a variety of levels, which add some teeth to the shorter nature of the course and ensure you have to maintain your focus at all times with the putter.

With the pleasant addition of wildlife strolling tamely around the course, a trip to the Sardinia Bay Golf Club is well worth it. 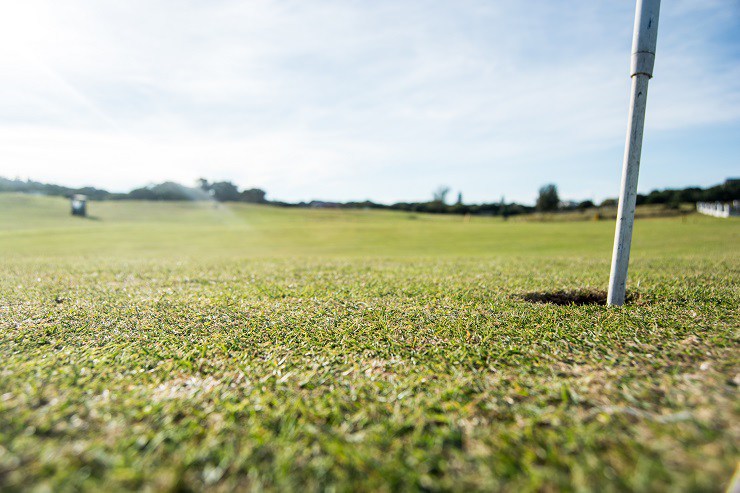 The Sardinia Bay course, situated in the Sardinia Bay Golf and Wildlife Estate, offers an interesting challenge for golfers of all levels. Picture: Full Stop Communications