The course is an integral part of the estate and belongs to the Home Owners Association (HOA).

Volker, who works alongside club managing director James Blyth, took over management of the club four years ago when it was still a par-three mashie course.

He said they then decided that the “mediocre little” mashie golf course did not fit in with the “boutique” profile of the estate.

“That was when we decided it needed to be changed into a full-length nine-hole course to fit in with what the estate offers,” Volker said.

“We also made it bigger and longer and as a result we were given affiliated status by the EPGU (Eastern Province Golf Union) and SAGA (South African Golf Association).

“That meant our members were able to get handicapped, which can’t happen with a mashie course.

“We were then able to offer affiliation to our members as well as the home owners on the estate. It also attracts more people from outside to join the golf club and get a sense of what the estate is about.”

The course underwent several changes and upgrades over the past four years until the final restructuring took place late last year.

“We did a lot of upgrades such as reconstructing fairways, changing angles and lengthening holes.

“This all made the course a delightful addition to the estate,” Volker said, adding that he and Blyth were solely responsible for the various upgrades, both having a golfing background.

Volker said the golf club also catered especially for homeowners on the estate.

“Each household [on the estate] automatically gets two junior and two adult memberships of the club,” he said.

“The homeowners would just have to pay the compulsory fee to SAGA and the EPGU for affiliation because we don’t pay that out of our own pockets.

“But essentially homeowners get their memberships free of charge.”

“It is a golf and wildlife estate, so just like the wildlife is an attraction so too is the golf course,” he said.

“With the golf course in the great condition it is in now, people generally would definitely want to purchase a plot.

“The value of the properties has shot up since we started, when the course was still run down.

“It is also a very safe environment for people to play golf in.”

The course was an important element of the estate as a whole, Volker explained.

“Many of the homeowners are very lifestyle-orientated, meaning they moved into the estate for the nature and wildlife.

“Then you have many people who would have envisioned having a beautiful golf course at the backyards of their homes. That is why many people buy plots here.

“You also get people who want both, and this estate offers just that.

“So the course really is a selling point,” he added.

Volker said he hoped the upgrades to the course would attract more keen golfers and in turn create more exposure for the estate itself.

“It has been stuck in many people’s minds that Sardinia Bay is a mashie golf course. Overcoming that perception has been one of our challenges over the last four years.

“We want to convert people who have never been here and encourage them to come down and play.

“We’ve done a lot in terms of not just upgrading the course but also adding fertilisers to get the greens up to standard.

“The upgrades will definitely attract more people. The course is also more familiar now that it is within an estate-type environment.”

Volker said they would continue to maintain the course in order to ensure it remained a “lush green boutique golf course” for the estate.

He added that the restaurant at the golf club, the Frosty Guv’nor, added an “extra luxury” for homeowners on the estate.

“We’re growing the course to the best it can be while offering a service to residents of the estate in the form of the restaurant. That’s the ultimate game plan we’re looking at.

“This is the only golf and wildlife estate in the Eastern Cape, so it will be an investment to stay here and there will definitely be a return.”
(ends) 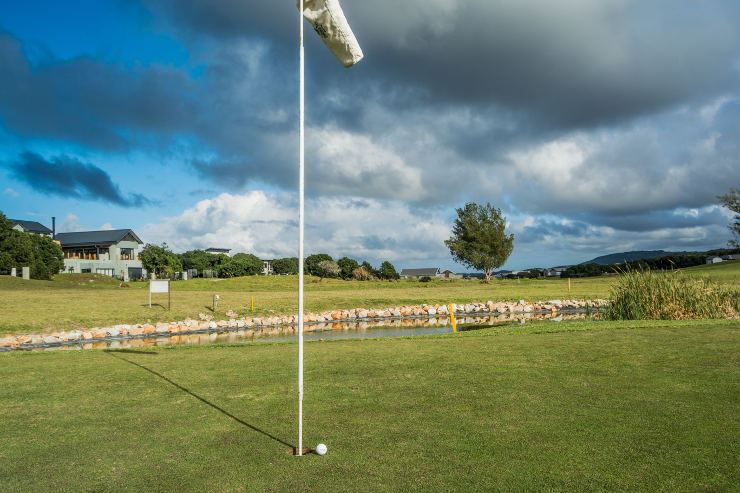 The Sardinia Bay Golf Club and full-length nine-hole course are a delightful attraction to the adjacent Wildlife Estate, according to Stephen Volker, the club’s general manager. Photo: Full Stop Communications