After securing their second successive Varsity Hockey title on Monday, the University of Johannesburg will immediately switch their focus to other objectives when they return to the Southern Gauteng premier league this week.

“We will actually be playing league again this weekend, against Wits,” said UJ coach Garreth Ewing, “and then we begin the build-up towards Ussa.”

The University Sport South Africa tournament will take place in Johannesburg from July 4 to 9, where Tuks will be defending their title.

“We only came fifth last year. We had a tough pool and didn’t get through it,” said Ewing.

“It is a difficult tournament with only eight sides, so it’s a bit of a hit and run affair. It will be interesting, but playing in Johannesburg will be to our advantage.”

Meanwhile, the university’s women’s team will be hoping to defend the title they won last year.

UJ, who won the inaugural biennial Varsity Hockey tournament in 2014, defeated Tuks 4-2 in a thrilling and tense final at the UJ astro.

While they went through the tournament unbeaten, the result of the final was in the balance until the closing stages.

Leading 3-2 with just minutes remaining, UJ conceded a penalty corner, but Le-Neal Jackson stormed out in the first wave, blocked the ball and set off on a run upfield.

His first shot was blocked by Tuks substitute goalkeeper Keagan du Preez, but the rebound fell to Tyson Dlungwana, who buried the ball in the goal to make it 4-2 with just seconds remaining.

Reflecting on the tournament, Ewing said they were thrilled to win the title again.

“I think it’s really good for us in terms of momentum for the rest of the season and it’s nice to know that the consistency of what we do is still paying off.

“We work really hard at getting good players in and at our conditioning, so it’s nice to have that pay off for us.”

“On the day anyone can win, but we are happy to take this title again. It’s a really special thing to do.

“The guys were quite nervous, but very focused. We just had to manage a couple of the Tuks attacks and then take our chances when they came.

“We knew we would make chances and we did. Their goalie played exceptionally well to keep them in the game for as long as he did, but our guys were really up for it.” 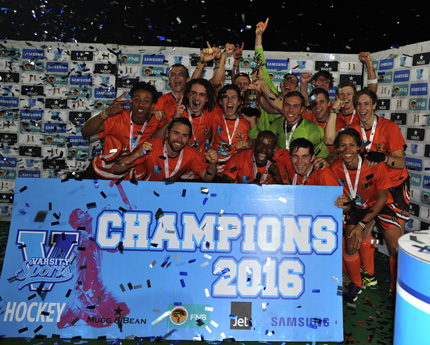 Members of the University of Johannesburg team celebrate their Varsity Hockey triumph in Johannesburg. Photo: Saspa