The Dimension Data rider blasted his way around a wind-swept 37km time-trial course to record a time of 47:16. His teammate Keagan Girdleston placed second in 48:48 with USN Purefit’s former national road champion Darren Lill third in 49:45.

De Bod, the silver medallist behind Darryl Impey in last month’s national elite time-trial championships, now leads the general classification with a combined time of 3:05:11. Girdlestone moved into second on 3:06:43 with Lill third in 3:07:40.

In the women’s race, Danish superstar Annika Langvad (Spur-Specialized) rose to the occasion after a recent illness to win the stage in 57:21 ahead of former British road champion Sharon Laws in 57:41 and Lise Olivier (Time Freight) in 58:28.

“After SA’s where I came second behind Darryl and won the U23 title there was a lot of pressure,” said the 19-year-old De Bod, who grew up in Stellenbosch.

“Last night I studied the route and it was definitely a goal of mine to win the time-trial.

“This morning I saw it was going to be a headwind start and I knew it was important not to go out too fast, but I did.

“The last stretch of about seven kilometres, where you turn left into the wind, I felt that I was a bit tired. But I was still going well enough and could keep the power up.

De Bod said he would try and put up a good fight now. “I’m not going to make it easy for anyone to take yellow off my shoulders.”

He said he had a good team behind him and although they had lost one rider and another was feeling unwell, he believed they could pull it off.

“Tomorrow is going to be a hard stage to focus. My teammates will have to support me until the last climb and hopefully I can take it from there.”

Langvad said she knew that she was going well because she wanted to be in good shape for the Cape Epic.

“That being said, I had quite a rough time recently with my health. I’ve been on antibiotics until Sunday and luckily got the green light to race here.

“I didn’t feel 100% yesterday but I hope that I will feel better each day.

She said her strategy was to take the time-trial, presented by Buffet Olives, by feel.

“Even though I had a power meter on my bike, I didn’t look at the numbers. I only went by feeling because I know that is how I work the best.

“I think I got the best out of myself today. Of course I got very tired at the end, but I think that is exactly how it has to be.”

Langvad said she felt she was in good enough shape to win the tour. 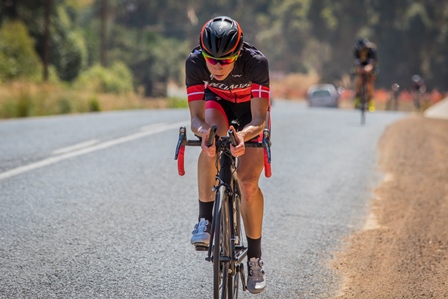