Stefan de Bod put in a performance that belied his years on the 133km queen stage of the Bestmed Tour of Good Hope to retain the yellow jersey on top of Du Toitskloof Pass today.

The 19-year-old Dimension Data rider, who won yesterday’s individual time-trial to surge into the overall lead, finished third on the crucial third stage that started at La Paris Estate between Paarl and Franschhoek.

New Zealand’s Sam Gaze, who narrowly failed to win the opening stage, took the victory ahead of Eritrea’s Metkel Eyob after a perfect counter punch over the final few hundred metres.

“I wanted to do well, but didn’t expect to be in it for the win,” said the 20-year-old from Cambridge. “I gave it my best hand and it worked out.”

Gaze, who has been training in South Africa under Christoph Sauser in his bid to gain selection for Rio,” said the peloton ascended Franschhoek Pass at a brisk pace and he made the front split before everything came back together again.

“Ater that, there were countless attacks but nothing really stuck until about 10 or 15km from the finish.

“A group of four got away on the early part of the climb, but they were roped in pretty quickly. From there it was survival of the fittest really.”

Gaze, who rides for Songo.info, found himself in the final selection that included three Dimension Data riders.

“I was just trying to conserve as much as possible as I wasn’t sure how it was going to play out. Luckily it came down to a sprint.

“I was marking the yellow jersey but his teammate launched off with about 150 to 200m to go. From there I just went and was able to roll past him.”

Laws now trails Langvad by 10 seconds in the general classification with Kleinhans 2:24 back.

“My objective was of course to win but also to take the king of the mountains prime on Franschhoek Pass,” said Langvad. “I went really hard over the last kilometre and got it quite comfortably.

“Then everything came together again and it was about saving energy for the finishing climb.

“I thought we had three kilometres left but then saw the one-kilometre sign. I applied pressure and only Sharon followed me.

“In the end it was a drag race and about who had the most left in the legs. I just closed my eyes and gave it all I had to gain as much advantage as possible.” 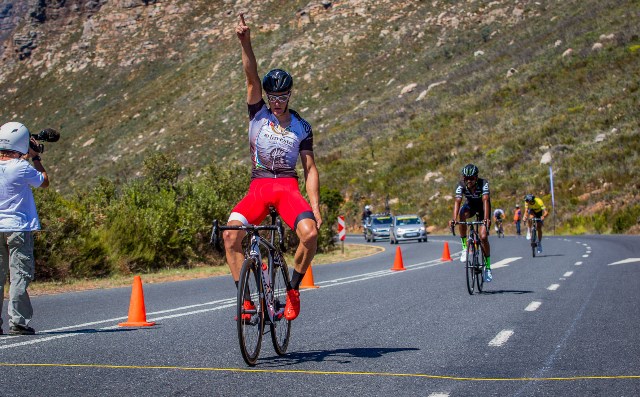