The fourth stage of the Bestmed Tour of Good Hope came to a dramatic conclusion when Team Telkom’s Reynard Butler took stage honours in a photo finish ahead of New Zealand’s Sam Gaze at La Paris Estate in Paarl today.

Metres from the line it looked like Gaze – who won on top of Du Toitskloof Pass the previous day – had the victory in the bag but Butler was able to draw even as the man from Cambridge lifted his arms in early celebration.

Video footage revealed that Johannesburg-based Butler had in fact crossed the line first, by two-thousands of a second, in 3:19:43.

“With 500m to go, my team was in front leading me out and the Specialized guys came from the right with a flyer,” the 26-year-old said.

“I shouted at my boys but it was a bit too late. Sam came on my outside and I just kept on sprinting as I had the belief that I could still do it.”

Butler said he was hopeful of getting the nod as the commissaires peered over the footage as he felt that he had sneaked up and passed his opponent on the line.

“It is up to the officials in the end and the footage maybe showed that too.”

Earlier in the stage, a group of six riders consisting of Morné van Niekerk and Jayde Julius of Dimension Data, Gawie Combrinck from Songo.info, Waylon Woolcock of USN-Purefit and Kent Main and Bradley Potgieter from RoadCover got away on the descent of Du Toitskloof.

The group built a maximum lead of 3:50 as they headed through Slanghoek on their way to Bain’s Kloof Pass.

They started the ascent with a two-minute advantage over the peloton with Potgieter and Main popping halfway up.

The remaining quartet worked well together as they passed through Paarl and held onto a minute-and-a-half lead until the final 10km.

At this point, they started to play cat and mouse and their lead diminished until the peloton reeled them in with 2km to go.

Dimension Data’s Metkel Eyob consolidated his lead in the king of the mountains competition after winning the first prime on Du Toitskloof with Julius taking the second on Bain’s Kloof.

The women’s race went according to form with the overall leader, Annika Langvad of Denmark, snatching another close victory ahead of Britain’s Sharon Laws.

“I’m in the yellow jersey and needed to defend it while conserving as much energy as possible,” said Langvad, who rides in the colours of Spur-Specialized.

“Sharon was really putting the hammer down on the first climb, but I managed to hold onto her wheel and outsprinted her for the king of the mountains points.

“After the top, we were only four girls together including my teammate Ariane Kleinhans and Carla Oberholzer.”

She said they worked well together until the last climb where Laws once again applied the pressure.

“I knew it was all about following her wheel and was again able to grab the KOM on top.”

Langvad said she wanted the group to come together again to let her teammate back into the race.

“But Sharon just time-trialled from there and I couldn’t do anything else but hold onto her wheel and go for the final sprint.

“She rode very, very strongly and I really admired her effort towards the finish. Then again, it is racing and I wanted to defend my jersey.” 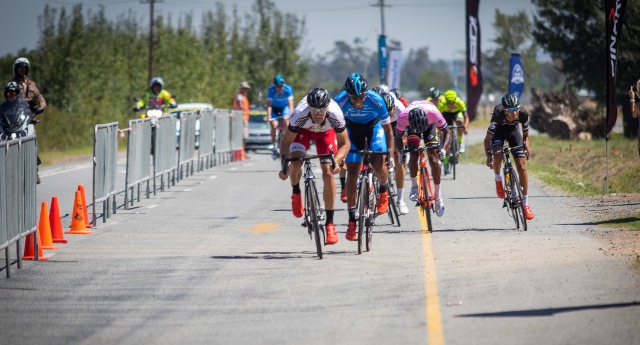