Stefan de Bod finished second on the final stage to win the overall title at the Bestmed Tour of Good Hope at the Taal Monument above Paarl today.

The 19-year-old Dimension Data star took the yellow jersey after the individual time-trial on stage two and never looked in trouble as he went about his business of defending it over the final three days, which included two mountain top finishes.

“Going into this race we had a three-point plan,” said De Bod.

“Our first objective was to win the general classification, the second to win two stages and lastly to take either the king of the mountains or points classifications as well.”

He said the team was “amazing” in supporting him in his bid for the GC.

“I couldn’t have done it without them.”

De Bod said his personal objective was to win at least one stage, but especially the time-trial.

“I tried to win another but got the GC and was happy to help set Keagan up for the win today.”

He said the whole tour was tough, with the penultimate stage, which included the Du Toitskloof and Bain’s Kloof ascents, the most stressful.

“There was a big break and I also didn’t feel so good yesterday, but it helps to have a team like this behind me.”

The U23 national time-trial champion said that although the last stage was relatively short and that his closest challenger was from within his own team, he was concerned that a small breakaway group, crashes or punctures could spoil his day.

“I grew up in the Western Cape so I’m very happy to win this tour on my home ground. It is certainly one of the biggest wins of my career and a great start to the year.”

Denmark’s Annika Langvad won four of the five stages, including the final one, to secure the yellow jersey in the women’s race.

“This race was a nice adventure,” said Langvad, who will be targeting another Cape Epic title later this month.

“My objective was to use it as my final preparation for the Epic, but, of course, when you start doing well you get caught up in the racing.” 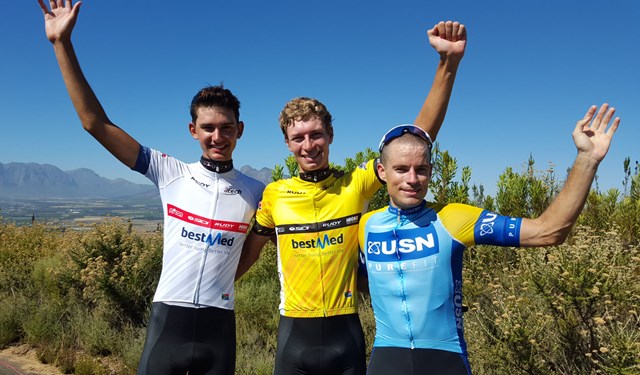 The overall podium in the men’s race at the Bestmed Tour of Good Hope were, from left, Keagan Girdlestone of Dimension Data, Stefan de Bod of Dimension Data and Darren Lill of USN-Purefit. Photo: Full Stop Communications