Port Elizabeth sports administrator Riaan Osman has ticked off a long-held life goal from his bucket list after being appointed manager of the SA U19 cricket team that competed in Bangladesh last week.

The biennial ICC U19 Cricket World Cup began on January 27 and runs until February 14, with matches being played at venues such as Dhaka, Chittagong, Sylhet and Cox’s Bazar.

“I always strived towards being granted an opportunity to serve my country as team manager, so I was humbled by Cricket South Africa’s faith in me,” said Osman, deputy director of Madibaz Sport.

Defending champions South Africa were knocked out early after a shock two-wicket loss to Namibia.

Osman said the team were very disappointed and, although all the players were attending their first World Cup, had no choice but to put the loss behind them.

“It is always tough picking guys up from an unexpected loss but we had a good chat acknowledging our mistakes and where we went wrong and are focusing on the next matches with renewed vigor.

Due to the perceived security threat in Bangladesh that led to Australia withdrawing, the only time they were allowed to leave the hotel was for practices and matches, said Osman.

“We were escorted by police wherever we went and were not allowed to leave the hotel without police presence – even for a haircut.

“This was the most frustrating part, but the squad accepted that the security measures were put in place for their safety.”

“We also had former Indian cricketer Sriram Sridharan as spinning consultant to assist with our technique on turning sub-continent pitches.”

In a career spanning more than 20 years, Osman has been involved in cricket, hockey, astroturf and facility management, serving on several boards and at university level.

In 2005, he was appointment sport manager of NMMU cricket before more recently accepting the post of deputy director at Madibaz Sport.

He has also worked as liaison officer and manager for CSA and the England Cricket Board and is chairman of university cricket in South Africa.

Before being given what he calls the “honour” of managing a South African team, he worked with international teams such as Pakistan, Sri Lanka, Ireland and IPL giants Mumbai Indians.

“I believe that to achieve anything in life one has to be prepared to work hard – nothing comes easily,” he said.

“I also value the holistic development of people, aimed at producing well-rounded individuals who can make a difference in society.”

Osman’s success has stemmed from building a set of skills – and then building more.

“Studying a sport qualification is not enough. You need to network during your studies and be prepared to accept job opportunities without any remuneration.

“At the same time, only settling to play cricket without studying or developing a trade is not ideal.

“Learn to prioritise your goals, develop sound time management skills and always have something to fall back on should your professional career not take off.”

Juggling work and play is all in a day’s work for this married father of three – and family is the bedrock of his success. 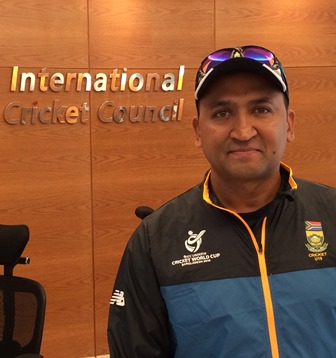 NMMU sports administrator Riaan Osman was appointed team manager of the SA U19 cricket team that competed in the ICC U19 World Cup in Bangladesh last week. Photo: Supplied