Dozens of high fives did the rounds at the University of Johannesburg after Stephen Cook had hit 14 fours in an innings of 115 in his test cricket debut at Centurion the other day.

Cook had been a star student and a role model at UJ well before his belated elevation to international cricket for the fourth test match between South Africa and England.

The 33-year-old had won an award for academic excellence and, unbeknown to most spectators and television viewers who saw his superb batting at SuperSport Park, had earned a BCom LLB to go with all the cricket records behind his name.

When Cook began his studies in 2003, UJ was still known as Rand Afrikaans University. One of his varsity friends was rugby superstar Bryan Habana, whom he had known from their days at King Edward VII School in Johannesburg.

By the time he completed his LLB in 2009 – after a break to play club cricket in England – Cook had represented UJ in several SA universities and national club tournaments.

Playing first-class cricket for the Gauteng Lions while pursuing his academic qualifications, Cook had to keep his eye on the ball, so to speak. But encouragement and advice were never far, because the staff at UJ included Stephen’s famous cricketing father Jimmy.

The elder Cook was also well-versed in the art of biding his time, having earned his first call-up for South Africa at the age of 39 after scoring runs by the ton as opening batsman for what used to be Transvaal’s “Mean Machine”.

With a teaching degree behind his name, he was also a highly rated first-division soccer player for Wits and later became the cricket manager at UJ.

There could not have been a prouder man in South Africa than Stephen James Cook the day Stephen Craig Cook became the sixth South African to score a century on test debut.

Jimmy had to cancel an overseas trip to watch his lad play in his first test match, but was just too happy to do so. Also watching his heroics at SuperSport Park were Stephen’s mother Linsey, his wife Laura and their little daughter Elianna.

Cook junior rewrote the record books in 2009 when he scored 390 runs – the first triple “ton” for the Lions – against the Warriors in a first-class innings.

As one of the few current international cricketers who boast a university degree, he intends to concentrate on his cricket career for a while still before, perhaps, putting his qualifications to good use. 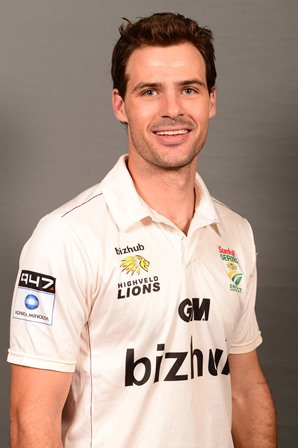 Proteas debutant and University of Johannesburg alumnus Stephen Cook had to balance cricket and academics on the road to success. Photo: Supplied