Madibaz go down fighting in sixth round of Varsity Cup

FNB NMMU-Madibaz head coach David Maidza was heartened by his side’s determined effort as they went down fighting against the FNB Maties in the sixth round of the FNB Varsity Cup presented by Steinhoff International in Stellenbosch on Monday night.

After taking an 8-5 lead into halftime, the Port Elizabeth side ultimately went down 26-16 to the home team at the Danie Craven Stadium.

Maidza said he was pleased that the young team continued to show a marked improvement as the tournament wore on, despite the fact that they would not progress beyond the round-robin stages this year.

“We need to work on a few technical aspects; we’re just lacking that final touch and the composure at times. But these are things that can be rectified once we have been playing together for a longer period of time,” he said.

Although Madibaz fans had seen their team march through to the semi-finals in the preceding two seasons, it was back to basics this year for the fresh crop of inexperienced new players.

According to Maidza, the highly competitive Varsity Cup had been a tough introduction to tertiary-level rugby for the young squad.

“We knew that we would have to really push against the bigger packs and I really believe that we managed to perform admirably well considering what we were up against,” he said.

“I hope that these players will be part of the team for years to come so that we can build a strong squad in the future.”

Maidza said his players had shown what they were made of despite a lacklustre first half in the Stellenbosch game.

“In the second half we came out and performed much better but Maties were able to capitalise on one or two of our errors and that gave them the edge they needed.”
Although the Madibaz were out of the running for the 2015 title, Maidza said they still planned to put in a strong performance on their home turf and finish the tournament on a positive note.

“It’s going to be a really tough task against Tuks but we need to make sure that we do our job and give it our all to show our supporters a good last home game next week,” he said.

The Madibaz are set to take on the log leaders in the final round-robin fixture, which kicks off at 4.45pm at the NMMU-Madibaz Stadium in Port Elizabeth on March 23.

Meanwhile, the FNB NMMU’s Young Guns claimed an encouraging third consecutive victory of the tournament when they left the FNB Junior Maties trailing 40-16 in Stellenbosch on Monday. 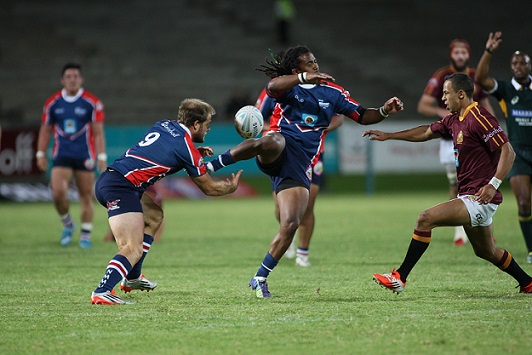