Player injuries have forced the FNB NMMU-Madibaz to make several changes to their starting line-up against FNB Maties for the sixth round of the FNB Varsity Cup presented by Steinhoff International in Stellenbosch on Monday night.

Madibaz head coach David Maidza has made a number of strategic alterations to the team sheet, which will see some key players taking a breather following four losses on the trot.

Despite being out of contention for this season’s Varsity Cup crown, Maidza said he hoped his team would continue to show improvement after their two-point loss to the FNB Shimlas earlier this week.

“The boys really improved in the last game and I am hoping that the performance will be repeated on Monday,” said Maidza.

He said the players had once again been preparing well and were beginning to work better as a team.

“As I said earlier in the season, it would take a couple of games for the squad to really start to gel and that is what we are seeing now.”

Scrumhalf Daniel Acker returns to the backline for the penultimate round-robin fixture, with Ivan Ludick relinquishing the number nine jersey for a seat on the bench.

Brian Skosana joins the starting line-up at left wing as he replaces the injured Yamkela Ngam.

Loosehead prop Marzuq Maarman also comes off the bench to give Arno Ebersohn – who has played every match this season – a much-needed rest.

Steven Robesson will come on as tighthead prop for Brendan Olivier who will also sit out due to injury, while Laurence Christie starts on the sidelines as replacement prop.

Jody Reyneke takes over at hooker from Dane van der Westhuizen, who dons the number 16.

After putting his body on the line in last week’s game, right lock Tyler Paul will take a break in favour of Rob Louw.

Ivan-John Du Preez and Andile Jho complete the bench at numbers 19 and 21 respectively.

Maidza said he believed the team’s confidence had improved after their performance this week and hoped it would carry over into the final two games of the competition.

“But we cannot just keep on thinking that it will happen on its own. We still need to go out and do a good job in Stellenbosch.

“It’s going to be a difficult game and we are still looking to finishing off strong this season,” he said.

The match kicks off at 6.30pm at the Danie Craven Stadium in Stellenbosch. 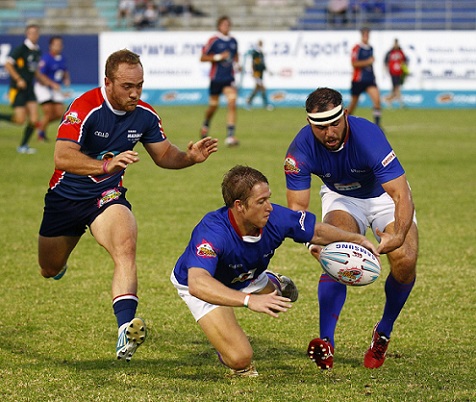 Scrumhalf Ivan Ludick (left) will start on the bench for the injury-plagued FNB NMMU-Madibaz in their sixth round clash with FNB Maties in the FNB Varsity Cup presented by Steinhoff International in Stellenbosch on Monday night. Photo: Saspa