Madibaz up for the fight at Cape Town regatta

The NMMU Rowing Club’s men and women rowers are set to compete against seven other tertiary institutions at the University Sprints Regatta on the Misverstand Dam outside Cape Town on Friday and Saturday.

The Madibaz rowers are hoping to improve their results at the event, hosted by the University of Cape Town this year, after both NMMU teams placed seventh in the 2014 tussle.

“This regatta is generally the highlight of our sprints season and there will be a lot of strong competition this year, so we need to come out fighting,” said women’s squad vice-captain Kristen Bosch.

She said that although most of their members were new to the university, the teams had already been enjoying success this season.

At the 128th Buffalo Regatta in East London last month, the Madibaz men’s B-crew claimed gold in the cox less four event, while the women’s C-crew won the coxed fours.

The men’s and women’s B-crews took silver and bronze respectively in the double sculls, while the university’s C-crews also claimed second in the women’s single sculls and third in the men’s fours.

“Our athletes have been performing well in the sculling events such as the singles, doubles and quads.

“Our women’s division is looking strong with large numbers going up to compete. The men’s division is considerably smaller, so we will only expect performance from our smaller boat classes such as the single and double.”

Bosch said the Madibaz men and women trained together almost every day both on water and on the ergo (rowing) machine and were a tightly knit unit.

“We have been working really hard and I’m sure our performance will reflect this.”

NMMU aquatics manager Melinda Goosen said that although Madibaz were in a building phase with several novices, they looked forward to good results from their experienced rowers. 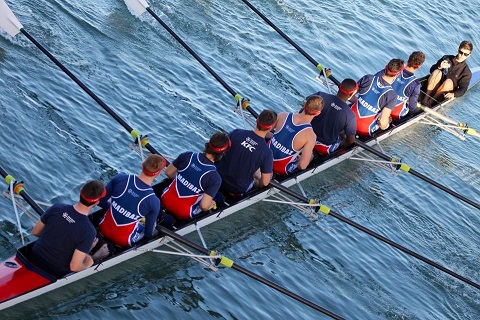 The NMMU Rowing Club’s men and women rowers are set to compete against seven other tertiary institutions at the University Sprints Regatta on the Misverstand Dam near Cape Town from March 20 to 21. Photo: Supplied