More than 250 track and field athletes from schools, clubs and universities are expected to take part in the various age categories from under-15 to under-25 years. Older and master level athletes will compete in the latter age group.

According to Madibaz athletics manager Nellis Bothma, this will be one of the final opportunities for the public to see some of the institution’s top senior stars in action.

“Many of our top athletes are finishing their studies this year and it could be one of the last chances to see them attempt to break an EP record or two.”

All eyes will be on the likes of third-year student Garth Ellis, who took bronze in the high jump at the SA U23 and senior championships with leaps of 2.05 and 2.10m respectively.

Bothma said the EPA meet would be the first major local competition since NMMU hosted the high-profile Varsity Athletics series in March.

“I think EP Athletics has learnt a lot from Varsity Athletics and we’ve incorporated a lot of the spectator-friendly, action-packed elements into the day’s programme.”

The Madibaz will field a number of U23 national champions in their 50-strong squad, including Ischke Senekal (shot put and discus), Lionel Drury (hammer throw) and Jeannie van Dyk (polevault), as well as hammer throw specialists Magdaleen Louw and Mieke Stander, who won the U23 and junior titles respectively.

Bothma said these athletes had been training hard throughout the winter season, preparing well for the off-season events.

The event starts at 9am at the Madibaz Stadium. Registration costs R20 and closes half an hour before the start of each event.

All athletes must have a licence to participate and temporary licences will be available at a cost of R30. 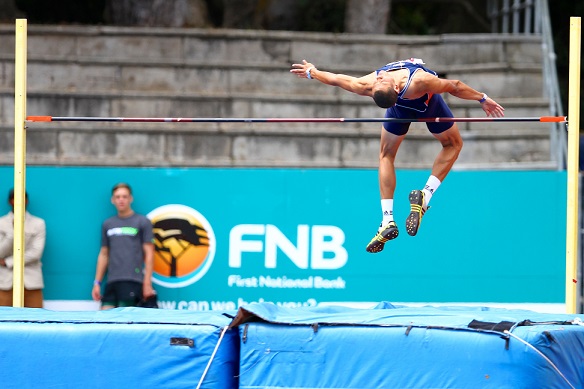 High jumper Garth Ellis will be in action for the Madibaz when the first Eastern Province Athletics meeting of the new season takes place at the NMMU South Campus in Port Elizabeth on Saturday, October 11. Photo: Richard Huggard