The SPAR NMMU Madibaz’s Varsity Netball ambitions suffered a setback when the side went down 53-38 to defending champions Kovsies in Bloemfontein on Monday night.

Madibaz coach Dumisani Chauke said her team had known from the outset that the game would be a tough one on the University of the Free State’s home court.

Chauke said the Madibaz had trained hard in the weeks leading up to the match and prepared well for it.

“We stuck to our game plan in the first quarter but after that we allowed them to rattle us and take charge of the game.”

Despite this, she said the final scoreline did not accurately reflect what had gone on in the match.

In what was essentially a game of two halves, Chauke’s players took the game to Kovsies from the first whistle and were trailing just 28-22 at halftime.

In the remaining two quarters, the hosts took the game away from the visitors and never looked back.

“We struggled to bounce back once they took the lead and started piling on the points,” said Chauke.

With both teams’ energy levels flagging in the final quarter, Kovsies slogged away in the closing minutes to take the win plus the bonus point.

Despite the negative final result for the Madibaz, shooter Bavuyise Matyumza stood out above the opposition and was named FNB Player of the Match.

Chauke said the award was well deserved, as Matyumza had been a tower of strength in their shooting circle throughout the tournament.

“From game one Bavu has been shooting excellently and assisting the team in getting points on the scoreboard.”

With just two matches left in the round-robin section of the tournament, the Madibaz remain in sixth place in the overall standings.

Although their chances of a top-four finish look slim, Chauke said it was not an impossibility.

“I would like to believe it’s not but then each new game day is different.

“I believe we can still win against the University of Johannesburg on Sunday. The match against Pukke on Monday night is going to be a tough one but I know the girls will be up for the challenge.”

Both clashes take place at UJ, with the Pukke game being televised from 5.30pm on SuperSport. 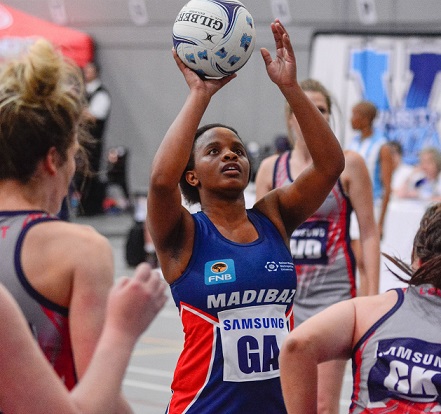 The SPAR NMMU Madibaz’s Bavuyise Matyumza was named FNB Player of the Match in their game against Kovsies in Bloemfontein on Monday night. Photo: Frikkie Kapp/Saspa