With their hopes of reaching the playoffs dimmed, the SPAR NMMU Madibaz will be playing for honour in the remaining round-robin matches of the Varsity Netball competition this coming weekend.

The team from Port Elizabeth will take on the fifth-placed University of Johannesburg on Sunday afternoon, followed by Pukke – who lie second on the log – on Monday evening.

According to Madibaz coach Dumisani Chauke, her girls were looking good and well rested, and ready to face their challengers in Johannesburg.

“UJ are very unpredictable on the court but we are ready for whatever state we find them in.”

Chauke said the team from North-West University, on the other hand, played a very physical game but that the Madibaz were also well prepared for their style of play.

“They have strong towers in both their shooting and defending circles, so that will pose a challenge to us, but the girls are ready.”

She said her squad had been working on key aspects of their own game over the past week, such as tighter man-to-man defences and stronger movements to get the ball into their shooting circle.

“On defence, we need to shut down their leads to the ball. On attack, we need there to be two or three options available for the person with the ball, so we can take it forward and into our shooting circle.”

Wing attack and centre Siphokazi Mapakati had been brought into the line-up to increase the team’s attacking options, said Chauke.

“Although a top-four position may be out of reach now, we’d really like to finish strong and move up from sixth position in the standings.”

Despite the disappointing result, she said she was happy with her young team’s overall performance in the tournament.

“We’ve had a good season and will be looking forward to a better one next year.”

The game against Pukke will be televised live from 5.30pm on Supersport. 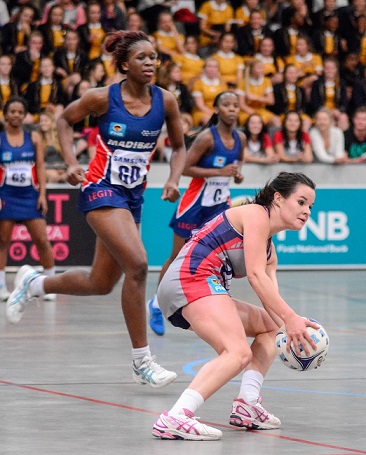 The SPAR NMMU Madibaz will be playing for pride when they take on the University of Johannesburg and North-West University in their remaining Varsity Netball fixtures this weekend. Photo: Frikkie Kapp/Saspa