Last year’s runner-up Andrew Hill will be looking to ascend to the top step of the podium at the FedGroup Berg & Bush mountain bike stage race, which starts in the Central Drakensberg this Friday.

Hill, who finished second in 2013 with Luke Roberts, will be vying for the title in the three-day Descent feature race alongside new teammate Tyrone White.

“I’d like to believe that we have the experience and racing strengths to stand on the top step this year,” said Hill.

“That said, anything can happen on the day and we need to go in confident that we can step up if something doesn’t go to plan on the bike.”

When it came to stage racing, he said consistency was key to success.

“Stage wins are great but the general classification is what really counts.

“That said, I feel the first day is usually where overall positions are formed.

“At 95km this is the longest and possibly the toughest stage, so if we can make our mark from the word go, we’ll hopefully stay upfront for the rest of the weekend.”

Hill said both he and White enjoyed the technical sections, could climb well and that their riding styles complemented each other.

“We’ve partnered up before and get on well both on and off the bike, which makes things a lot easier when tensions are high while racing.”

In the absence of defending champions Brandon Stewart and Konny Looser, he said their major challenges were likely to come from the likes of Tyron Bird and Brad Stroberg, who both had excellent stage racing experience.

Hill and White, who will be riding in the colours of TIB-Thule, will take on the testing 220km route, which starts at the new Border Post venue on top of Oliviershoek Pass near the provincial boundary with the Free State.

Hill said the new Drakensberg Drop section, which includes 30km of previously unridden trails, would be a great addition for the pro field, as it provided a longer uninterrupted section of single-track off the escarpment.

“From a racing perspective it’ll be interesting to see how this will affect the tactics, as nobody would have seen the route and we’ll all have to take it as it comes.”

He said the serious contenders would also welcome the omission of the boat crossing of Spioenkop Dam.

“The dam crossing was fun but I think for the guys racing the event the prospect of your lead being nullified by a poor boat choice was always quite disconcerting.

“In the end, the more time we spend riding trails, the happier we are!”

The Hillcrest resident said the trails were what set the FedGroup Berg & Bush apart.

“I love the amount of work and care that Gary (Green), Sollie (Prinsloo) and the rest of the team put into the trails to make them world class.

“The climb up and descent off Spioenkop has become synonymous with the event. It’s the route that makes me personally come back year after year.”

The 32-year-old has podiumed in each of his three outings at the event, finishing second with Waylon Woolcock in 2012 and winning the mixed category with Brenda Potts the previous year.

He has had a strong 2014 season to date including victories at the PwC Great Zuurberg Trek and BSI Dusi2c.

“I’ve had a productive stage racing season with some really good results. I enjoy the longer races and also the tactical thinking that goes with the stage win battles versus the chess game of the general classification.”

Hill said he was feeling confident and back in good form following a knee injury sustained during a fall at the Nedbank sani2c in May.

“I’ve worked hard to make a comeback and make the last half of the year count. I’ve been enjoying my racing and with that the results have followed.

“Last month, I had a solid second place at Hill2Hill behind James Reid and followed that up with a win the following weekend in Underberg.”

The FedGroup Berg & Bush starts with the Descent on October 10, followed by the Great Trek from October 14 and wraps up with the two-day event from October 18. 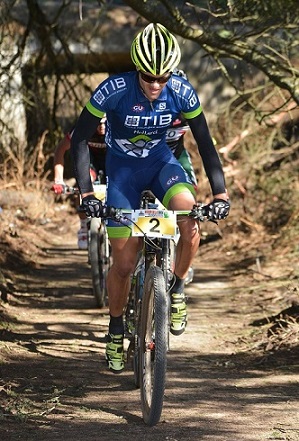