The Madibaz track and field stars shone at the first pre-season meeting of the Eastern Province Athletics league, which took place in near-perfect conditions at the NMMU Stadium in Port Elizabeth on Saturday.

Sprinter Kuda Mabhonga caused the major upset of the day when he snatched the men’s 100m title from pre-race favourite Lonwabo Majerman.

The final-year computer science student crossed the line in 11.25 seconds, with flamboyant teammate Jade Schutte second in 11.34. Majerman, who suffered a minor injury during the warm-up, finished third in 11.43.

Mabhonga said he was pleased with his performance but acknowledged that the harder work was still to come. “It’s my first meeting of the off-season so it’s hard to judge but the win is good motivation for what lies ahead.”

Newly crowned Madibaz male athlete of the year Mariano Eesou – who was third at the South African student cross country champs last week – dominated the 5 000m to take a convincing victory in 14:55.81.

In the field, national U23 and senior bronze medallist Garth Ellis set the bar high by clearing an impressive 2.05m in the high jump. “Although it’s not my personal best, 2.05m in the off-season is something I can work with,” he said.

SA student pole-vault champion Jeannie van Dyk impressed with a height of 3m while Ischke Senekal started her campaign to qualify for next year’s World Student Games in South Korea with wins in the discus (41.57m) and shot put (13.39m) events.

Young Queen’s College runner Siya Gqeba proved that he would be someone to watch this season when he outsprinted senior athletes to grab the men’s 200m and 400m titles. 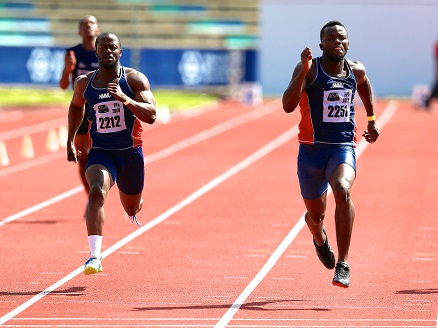