The SPAR NMMU Madibaz brought their netball season to an anticlimactic close as they quietly exited the Varsity Netball tournament in Johannesburg on Monday night.

The Madibaz lost their last game of the round-robin section against Pukke (63-37) but had beaten hosts the University of Johannesburg (50-25) the previous day to finish a respectable fifth in the overall standings.

The final fixtures reflect the up-and-down nature of the Madibaz campaign, with the team from Port Elizabeth ending the competition on three wins and four losses.

Madibaz head coach Dumisani Chauke said her relatively young and inexperienced squad had done well and she was pleased with their performance in the high-level competition.

“The standard was set very high by the team that made it to the semi-finals last year. Most of those senior players, myself included, were not part of the team this year.

“We may not have achieved a top-four finish this year but we have a different ‘tick’, so to speak.”

Chauke said her players had worked hard throughout the season in anticipation of the tough televised tournament.

“These young girls are always willing to learn and grow in the sport and it is encouraging to know that as a coach. It can only get better!”

With 294 goals for and 295 goals against them, the Madibaz demonstrated a good balance between attack and defence on the court.

“Our defence always do well but we will need to improve in our shooting circle. Although we’ve done well, we can always do better.”

Chauke said she was looking forward to an even greater season next year.

“I am proud of each and every one of my girls!”

She said they had already qualified for the third edition of the competition with a top-eight finish at the University Sport South Africa tournament earlier this year.

“So viewers will be seeing us again on their TV screens.”

Chauke said the management and players would sit down early next year to discuss their objectives for the 2015 tournament. 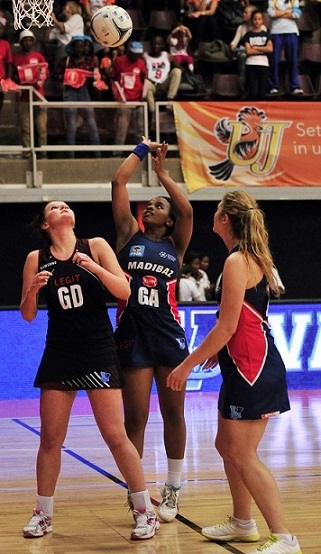