Sprinter Herman Fouché will be going flat out for a hat-trick of wins when he lines up at the Bestmed Campus2Campus Super Classic in Potchefstroom on Sunday.

The Bonitas fast man has made the race his own over the past two years, pushing hard on the final uphill drag to outsprint the bunch to the finish on both occasions.

This year Fouché will face a fresh obstacle as he takes on a new route for the 10th anniversary edition of the race, which is presented by ASG Events.

Undaunted, he said he and his four teammates – Luthando Kaka, HB Kruger, Clint Hendricks and Christopher Jennings – were looking forward to the challenge.

“We’ll give the new route a good scout before race day and make sure we know what’s waiting for us.”

The 107km out-and-back course will take riders from the North-West University campus in the direction of Parys.

Fouché said the undulating terrain could give his squad a few advantages that would make for some exciting racing.

“The rolling hills give us as a team more opportunities for a breakaway and to take the sting out of the other sprinters’ legs before the fast run to the finish.”

The West Rand resident said the biggest challenges were likely to come from fellow speed kings Nolan Hoffman of Team Abantu and Tyler Day of Westvaal-BMC.

“That is of course if the race comes down to a sprint. But a lot can happen before the finish line.”

Fouché said his teammates each had a number of race victories under their belts and they would have “a few cards to play”.

“If all else fails, then only do we decide to run for a sprint.”

The 27-year-old said his own form had been constant over the past few months, starting with a win on the longest stage of the Mzansi Tour in April.

“We had the GoWest criterium series last week, which has given us that extra sharpness for this weekend’s racing.” 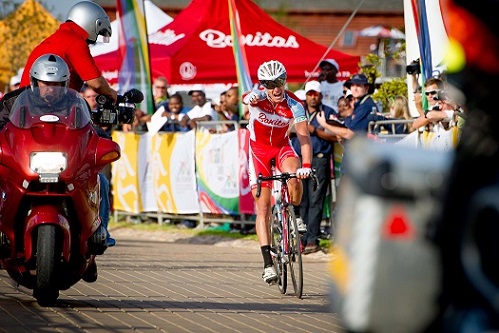 Bonitas sprinter Herman Fouché will be going flat out to make it three in a row at the Bestmed Campus2Campus SuperClassic, presented by ASG, in Potchefstroom on Sunday. Photo: Photosport International