The Madibaz started off on a high note with a 57-28 win against minnows Vaal University of Technology on Saturday.

In Sunday’s match, long-time rivals Maties made the most of their double-point power play to take the game away from the hosts. The Madibaz fought back but were unable to close the gap, going down 42-51 to the team from Stellenbosch.

On Monday night, the home team faced their toughest challenge yet as a powerful Tuks side took a commanding 59-25 win to continue their unbeaten streak in this year’s tournament.

Madibaz coach Dumisani Chauke said her team had played well generally and that she was satisfied with their performance.

“They played their best but there’s always room for improvement.

“The girls absorbed the pressure from Tuks well and there were some great things that we did in the match but there are still some things we can work on.”

Chauke said that while the Madibaz had made progress in their attacking play, they needed to tighten up their defences.

On that front, the PE-based team may be without the essential services of goalkeeper and Proteas player Zanele Vimbela, who picked up an ankle injury during the Tuks game.

Vimbela has been in good form since returning from the Commonwealth Games in August and was named FNB Player of the Match against VUT.

“I have not received a report yet from the biokineticist but we’ll have to make a judgement call once she’s seen a specialist,” said Chauke.

Looking ahead, she said the Madibaz would have their work cut out for them if they were still aiming to qualify for the playoffs.

The team has slipped from fourth to sixth position in the overall standings after the weekend’s bruising fixtures.

“If we still want to be in the top four, we need to win the three upcoming games,” said Chauke.

Chauke’s players next travel to Bloemfontein for their critical encounter with defending champions Kovsies on Monday night. 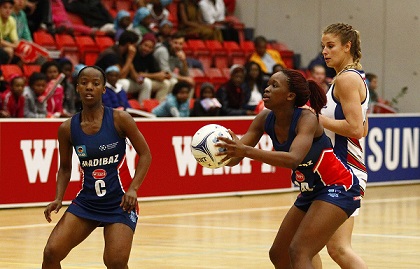