Juanita Venter of Team Bestmed-ASG delivered the first blow at the Clover Lowveld Tour by outgunning the top female riders in the country to win the opening stage time-trial at Hazyview on Thursday.

The veteran rider’s performance further established her as one of the top riders against the clock in South Africa.

In March, she won the first stage of the Bestmed Tour de Boland in similar fashion, forcing the top favourites to play catch-up for the remainder of the week.

On that occasion, she held onto the overall lead until the final stage, which finished on top of Franschhoek Pass. Olivier, a climbing specialist, won the grand finale to move into second place overall behind Ariane Kleinhans.

Venter’s dominating ride on Thursday was good news for team manager Owen Botha, who had to deal with the misfortune of two of his squad (Chane Jonker and Chante van der Merwe) withdrawing before the start due to illness and injury.

Although the experienced Venter leads the team, Botha said she was not their general classification prospect. This mantle falls on Capetonian Carmen Buchacher with Venter, Michelle Benson and Catherine Colyn riding in support.

While the 28-year-old Buchacher is focused on bagging the overall win at the Lowveld Tour, the team’s younger charges will look for a simultaneous good showing at this weekend’s Carousel Classic in Johannesburg.

The team for the one-day classic will be led by Kremetart champion Charlene Roux and she is supported by Andri Coetzee and Chrisel van der Merwe.

Although anchored by the experience of riders like Venter and Buchacher, Botha said it was a well-known fact that the team’s focus was to develop riders for the future.

“We have the four best junior cyclists in the country in Monique Gerber, Benson, Colyn and (Chante) Van der Merwe.”

He expected Benson, Colyn and Gerber to be on the short list for selection to the World Junior Road Championships in Spain next month. 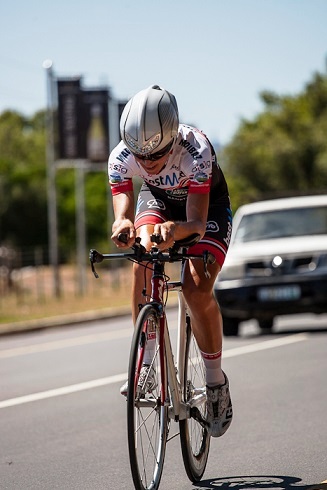 Juanita Venter of Team Bestmed-ASG delivered the first punch at the Clover Lowveld Tour when she won the opening stage at Hazyview on Thursday. Photo: Warren Elsom/Capcha