The University of Johannesburg’s focus on developing student-athletes paid off handsomely when three of their finest literally leapt onto the podium at last week’s Commonwealth Games.

Transport management students Zarck Visser (25) and Rushwahl Samaai (22) secured the silver and bronze medals in the long jump with distances of 8.12m and 8.08m respectively, while club member and former Olympic medallist Khotso Mokoena took gold in the triple jump with 17.20m.

Eight athletes and staff from UJ formed part of the contingent of 150 South Africans who competed against their peers from 35 nations in Glasgow, Scotland.

“We want to congratulate our athletes and coaches for their world-class performances at the Games,” said senior sport manager Francois Fouche.

“We thank you for flying the UJ flag high. You have made us proud.”

Samaai, who matriculated from Paarl Gimnasium, said his first international experience was amazing.

“I enjoyed every single moment. The stadium was packed during every session, the people were friendly and the atmosphere in the village was amazing.”

Samaai said his biggest challenge was participating without his coach, Jenny Kingwill.

“It was difficult to train alone. Although my coach wasn’t there in person, she was there in heart and spirit.”

UJ staffer Emmarie Fouche, who was the official Commonwealth Games coach for the jumping disciplines, trained Visser and Mokoena and assisted with Samaai’s preparation.

Kahbelo Kgotimang, from Botswana, narrowly missed out on another medal for the academic institution when he placed fifth in the high jump.

“The performance by our students and coaches is a tremendous contribution to the local, continental and global stature of UJ,” said (Francois) Fouche.

“It has led to the university establishing itself as a preferred student sporting destination, not only for Africa, but globally.

“These performances have shown that we can compete with the rest of the world and defeat them on the global stage.”

Visser and Samaai have been included in the national team for the 19th CAA Senior African Athletics Championships in Morocco from August 10 to 14. 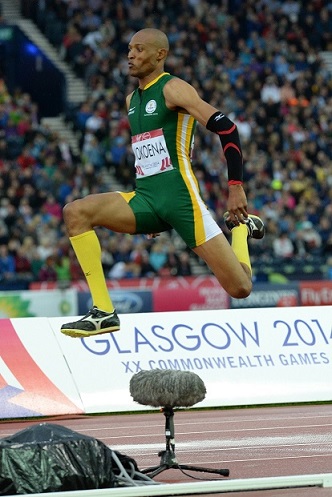 Khotso Mokoena in action in the triple jump at the Commonwealth Games in Glasgow, Scotland, last week. Photo: Wessel Oosthuizen